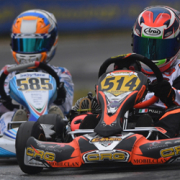 Giovanni Minardi and Alberto Tonti are happy to announce that Nicholas Pujatti of Pordenone Italy, born in 2007 has become part of the Minardi Management family together with kart drivers Andrea Kimi Antonelli and Thomas Baldassari, as well as drivers Karol Basz and Antonio D’Amico.

The agreement was reached with the driver of the Gatto family’s satellite team, CRG Gamoto, at the Sarno track during the recovery of the round of the WSK Super Master Series (which had been cancelled due to snow). He was the author of an important recovery in the Final when he managed to climb up ten positions in just eight laps, finishing the weekend with twelfth position in 60 Mini.

“We are very happy to gather Nicholas into the ranks of Minardi Management which could watch him up close from the beginning of the season. With today’s result he confirmed for us his value technically and we are anxious to begin working together full time during the next round to be held here at Sarno once more,” commented Giovanni Minardi and Alberto Tonti.

“It was a positive weekend in which I enjoyed myself a lot by overtaking a few others. It was a good way to begin working together with Giovanni Minardi and Alberto Tonti. I am sure that together with them I will be able learn a lot and am eager to race once again here at Sarno next week before the beginning of the Italian Championship,” was the comment of Nicholas Pujatti.

Next week Naples’ International Circuit will host the fourth and final appointment of the WSK Super Master Series.