Blog - Latest News
You are here: Home / F1 / A detailed analysis of the F.1 World Champions 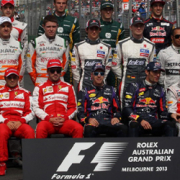 The last few F.1 Championships were enlivened by different world champions. The current season is being enlivened by 5 champions, who are battling each other, trying to get the most of each race. With the exception of Rosberg, all the 2013 season wins were taken by these world champions. Vettel took 3 wins, Alonso 2 and Raikkonen 1. That shows how much competitive and hard-fought a F.1 season can be.

Four of the five champions are in the first four positions of the standing, with the three-time-champion Sebastian Vettel leading on 132 points, followed by the two-time-champion Fernando Alonso on 96 points ahead of Kimi Raikkonen on 88 and Lewis Hamilton on 77. Jenson Button takes the 10th position on 25 points.

In this moment, Sebastian Vettel is skilled enough to drive the best car of the Championship. He has always optimized all the points he scored. He did a great job since the beginning, when he became the official driver of a Red Bull which was undergoing a changing process, trying to get the most of the regulation changes. In this respect, it was not so good even for Fernando Alonso. After taking some wins alongside Renault, the Spaniard moved to the McLaren where he had to deal with a very performing Lewis Hamilton, before becoming a Ferrari driver when the Scuderia had already won everything and was about to close an era. Now, along with the team he’s working to start a new era, which is not easy at all, considering the world championship’s high level.  I think that Fernando is the best driver of the Championship, even though he has got less than he would have deserved, so far, because of some wrong choices and, more in general, some situations which were not managed in a right way. In this first part of the season he brought out the 110% of his potential. He was very able to recover from low positions, as it happened in Canada. Unfortunately the points zone missed in Malaysia and Bahrein will have an impact on his season.

Lewis Hamilton made a stunning debut into F.1. The Englishman was able to get the better of the world champion Alonso by delivering excellent performances. He won the title the following year, when he was McLaren’s main driver. The English driver has got less than he would have deserved, as well. He’s a very fast driver, even during qualifying sessions. He suffered the decline of his ex-team. His team mate Rosberg has been undervalued, but he has high speed and resolution as a part of his DNA. The German driver has paid his dues time after time. The Englishman has certainly the toughest team mate ever.

As far as Kimi Raikkonen is concerned, we can say that he’s a completely reborn driver. Now he is maybe more determined than he was in 2008, the year he won the world championship at the wheel of the Ferrari. It was so good for him to leave F.1 for 2 years, he’s also in a very good shape. His Lotus was designed in a very good way and he has been so skillful in finishing in the points almost always. He will certainly be the 2014 F.1 season’s market-man.

Finally, there’s Jenson Button. He was able to bring a sweeping change to his career by winning the title at the wheel of the Brawn GP. Victory gave him that self-confidence he lacked, but I think he’s the most vulnerable driver among the 5 world champions. If he wants to win, he has to get the most of some situations, like being performing in the wet, even if he has an excellent tyre management. He’s an honest worker and a very good professional driver, however, even if he has a competitive car, he has more difficulties than the other champions.

Rookie drivers are different from each other

WDW ’98 and the Minardi-Ducati twinning event
Scroll to top