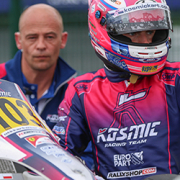 It was a troubled weekend for Karol Basz on the Spanish track owned by F1 world champion Fernando Alonso, the setting for the second round of the European kart championship.

The multi winning Polish driver limited the damage in the final by making himself the protagonist of an important fight back and of a solid race by crossing the finishing line in twelfth place after starting the race in thirty third spot.

On a track that proved that it was not up to the standard of an important appointment such as the European championship Karol fought against a number of problems that conditioned the result from the first sessions despite a good rhythm and managed to obtain a purse of four points.

“It was a very unlucky weekend, but once more the race rhythm was very good. During the qualifying sessions I threw myself into the fray wheel to wheel but unfortunately it cost me a penalty, even though I did not agree with some of the judges’ decisions regarding cutting the track. These episodes form part of motorsport and now I will concentrate on the next appointment with the Lamborghini at Monza in preparation for Le Mans,” was the comment from a bitter Karol Basz.

“Despite a weekend that was anything but easy Karol showed that he is a true professional making himself a protagonist of a solid Final which ended with a concrete result after climbing up the ranking in view of the championship. The track did not live up to expectations where the performances were distorted by inadequate kerbs and some cutting of corners was not punished which did not give the drivers the chance to express their true worth,” commented managers Giovanni Minardi and Alberto Tonti

As we await the their round on French soil the next weekend Karol will return to the wheel of the Antonelli Motorsport Team Lamborghini Huracan in the Italian GT championship appointment at the temple of speed that is Monza.

F1 | Gp Canada, THE POINT by Minardi “Mercedes untouchable, but the result...