Blog - Latest News
You are here: Home / Championships / Davide Rigon renews the contract with Ferrari and gets ready to compete... 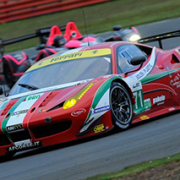 After running a successful 2013 season behind the wheel of the Ferrari Italia 458 GT in the Blancpain Endurance Series Championship, International GT Open and FIA WEC and taking part in the rookie testing at the wheel of the F138 at Silverstone, Davide Rigon has seen his professional relationship with the Scuderia Ferrari being extended.

The Italian driver will be at the squad’s disposal also for the 2014 and 2015 season, continuing to cooperate with the Scuderia as a test driver. His cooperation started in 2011. Apart from carrying out an intensive programme at the F1 simulator, Davide will also take part in the single-seater development testing sessions. Simultaneously to the contract renewal with the Scuderia Ferrari, he will also take part in the FIA World Endurance Championship. The Italian driver, who is managed by the Giovanni Minardi’s Minardi Management, will drive the three-world title winner Ferrari Italia 458 GT, alongside the Amato Ferrari AF Corse. His goal is to be confirmed as a top driver at a worldwide level.

After winning in Shanghai, finishing second in Bahrein and Sao Paulo and finishing fourth in Fuji, this year Davide Rigon will make his debut in the Endurance racing’ s most renowned race: the 24 hours of Le Mans, which is scheduled for the week end of June 14th-15th.

In the 2014 season Rigon will race at eight of the motorsport’ s most renowned venues. The first race is scheduled for April 20th at the historical track of Silverstone and it will be followed by the 24 hours to be raced at the spectacular Spa-Francorchamps circuit (May 3rd). On September 20th the Championship will move to America and afterwards to Japan (October 12th), China (November 2nd), Bahrein (November 15th) and Interlagos, Brazil (November 30th), where the final race will be run.

On January 25th/26th Davide opened his racing season by taking part in the 24 hours of Daytona, driving the Ferrari 458 GT.

“My dream is coming true day by day. The Scuderia Ferrari is my second family and it’s a great satisfaction to have the opportunity to cooperate with the world’s most important and famous team. We carried out a well-defined programme over the last seasons, so, having the opportunity to follow up on that, it’s really exciting. New technological challenges are expected for the future and we’re ready to face them with determination. I am grateful to the President Luca Cordero di Montezemolo, to the Team Principal Stefano Domenicali and to the Minardi Management’s staff, who has been by my side for 10 years”, says an excited Davide Rigon on the website www.minardi.it.

“As far as GT racing is concerned, I can’t wait to compete in the first race. To have the opportunity to compete in the FIA WEC World Championship is a great achievement and doing that behind the wheel of the reigning champion Ferrari 458 is even a more special experience. The 24 hours of Le Mans will be the cherry on top”, says also the Italian driver, “Daytona was a great experience. Thanks to Ferrari, I had the opportunity to learn a lot about this kind of competitions”, ends Rigon, “I felt comfortable behind the wheel of the 458 and I’m satisfied with my stint. Although there were more than 60 cars on the track, I made no mistakes.”

“I want to praise Davide for the results he achieved last year, thanks to which he deserved to enjoy the loyalty of the Scuderia Ferrari again. As Minardi Management, we’ve consistently worked hard throughout the season in order to reach the goals for the 2014 season. I’m sure Davide and Ferrari can achieve important goals even in a challenging season such as the upcoming one. It will be a very demanding season for Davide , especially if we consider that F1 regulations were changed a lot and he is engaged in the GT Championship”, says the manager Giovanni Minardi, “now he’s going to compete in the FIA WEC Championship. This year he will take part in the Championship from the very first event. Our goal was to make him shift from GT3 to GT2 this season and, as Minardi Management, we’re very pleased to have achieved it. It will be amazing to take part in the 24 hours of Le Mans”, ends the manager from Faenza.