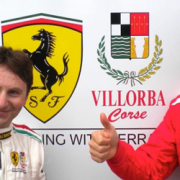 Davide Rigon confirmed to be in a very good shape by taking a Super GT class win in the first race of the International GT Open Championship’s seventh event, which took place at Monza circuit last week end.  The Italian driver also finished third in the Sunday’s race.

The talented Davide Rigon was at the wheel of the Villorba Corse’s Ferrari 458 GT2 and shared the driving with Andrea Montermini. Thanks to a perfect synchrony with the Sassuolo-born driver, Davide contributed to Andrea’s overall win one race in advance.

After Montermini qualified second in Q1, Davide Rigon took control of the car for the second round and he nearly got the pole. At the end of the qualifying session, he didn’t manage to get the pole only for six thousands of a second. In race-1 Montermini set the pace and pitted before leaving the control of the 458 to Rigon.  After paying a 45’ handicap, Davide jumped up from the 13th to the 5th place overall, giving the team the class win and setting the fastest laptime.

After qualifying second in Q2 and a great recovery in race-1, Davide took part in the GT Open’s last but one event. The race started with the safety-car under the rain, but, despite that, the Italian Champion soon got in the lead of the race, finishing his stint at the first place, before giving the car’s control to his teammate. After paying a 45’ penalty, the former F.1 driver finished 12th overall (3rd in the Super GTT class).

“I want to congratulate Andrea and the team on their fabulous win. I’m very happy I contributed to get that excellent result”, said Davide Rigon “It’s always exciting to win in Monza, even if we didn’t manage to get the overall win because of that 45 sec handicap in both races. We kept a good pace throughout the week end and, despite all the dangers due to a slippery track, we were able not to make any mistake. I still don’t know if I’ll go to Barcelona for the final round.”