Blog - Latest News
You are here: Home / F1 / F.1 mid- season: the stock of the situation by Gian Carlo Minardi 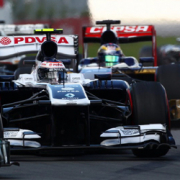 With the Canadian GP F.1 has entered the second half of the season. Teams and drivers are getting closer and closer to the season’s turning point which traditionally marks a division between top teams and second-tier teams, which has not enough financial resources to carry out the car development work, having also to start to develop 2014 turbo engine project which will bring much (expensive) news into F.1.

The Championship ‘s progress is more or less the same as it was in 2012; Red Bull is the standing’s leader and the Ferrari is just behind it. The Italian team has some regrets; if Fernando hadn’t finished outside the points zone in Malaysia and hadn’t driven a not so brilliant race in Sakhir, he would have had more points at this point of the season. The F138 showed to be very performing in the long run, but it’s still not as performing as rivals in qualifying.

Mercedes has delivered fluctuating performances, so far. The German team after the Monaco GP showed to have partially solved tyre degradation issues which affected it during the past season. The three-star-squad can probably play gooseberry in the future. In the first part of the Championship Lotus was very performing and we saw Raikkonen driving aggressive races. The squad is third in the World Championship and fourth in the Constructors’ Championship, but I don’t know if they have enough financial resources to develop 2014 turbo engine project. Depending on the development of turbo engine, a tight cooperation between engine supplier and race car constructor will be needed.

Force India continues to deliver great performances. The Indian squad is fifth ahead of McLaren and confirms to be a valuable outsider and a fearsome opponent. On the opposite, the Woking-based squad took a quite bad start of the season. The English team is reorganizing its internal structure and is maybe thinking about 2015 racing season, when Honda will become its official engine supplier.

After the Australian GP and Bahrein, the Toro Rosso managed to always get points finish and is now 7th in the Championship. The Faenza-based squad’s driver Jean-Eric Vergne will probably move to Red Bull if Webber leaves the squad at the end of the season.

This year’s Championship is influenced by tyre management. The solution adopted by the Pirelli to make each GP more and more spectacular maybe won’t give benefits to the Italian tyre manufacturer who will necessarily have to take technical measures. What is perplexing me is the performance gap between drivers of the same team. At Silverstone teams will test new tyres whose lateral part has been modified. We’ll wait for tyre testing to be made, so we’ll see if teams will all agree with new technical amendments.

Interview with the manager Giovanni Minardi

Rookie drivers are different from each other
Scroll to top