Blog - Latest News
You are here: Home / Championships / F1 | A race calendar of 25 Grands Prix. MINARDI “A significant increase i... 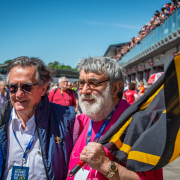 As we know, next March 15th the new Formula 1 season will start in Melbourne, the longest in history with 22 rounds (China GP allowing) on the calendar with the curtain falling on November 29th.

Liberty Media’s desire would be to further expand the race calendar up to 25 Grands Prix and. in a recent interview. FIA President Jean Todt said he was favoured this type of operation, highlighting that those who work in Formula 1 are privileged.

“This is a problem of the blanket that is too short,” commented Gian Carlo Minardi interviewed by www.minardi.it,

“In the light of the reduction of the costs with the inclusion of the budget cap it is insane to want to increase the numbers of GPs, but, on the other hand, the Circus no longer knows where it can find new money. Today the teams move from 70 to 80 people for each trip and, compared to next season with 21 rounds, there will be no reorganization which instead will be necessary for any passage to seasons with 25 GPs. In this case the teams will certainly be called to increase the personnel in order to ensure proper turnover,” commented the manager from Faenza who concluded,

“The personnel has the right to holidays and to rest days and this is not subject to be underestimated, as it would surely entail a increase in costs”

F1 | Gian Carlo MINARDI “A year of transition but the market for the second...

MINARDI “DAS IS A DECOY. I WILL EXPLAIN WHY”
Scroll to top