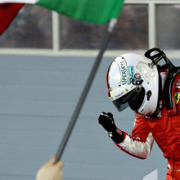 It was a weekend in search of perfection, maturity and safety which gave us a winning Ferrari beginning with qualifying and ended with Vettel in front of Bottas and Hamilton. It was an exciting grand prix with the last eight heart pounding laps in which Sebastian Vettel showed us that he is a four times world champion, as Lewis Hamilton showed in Australia when he put up an incredible lap in qualifying.

Ferrari’s German driver crowned his 200th GP in the best way possible by taking his 47th win. The men from Maranello did not make a single mistake in strategy by setting the race on the direct rival, Lewis Hamilton, since the world championship will be a fight between the two. The accident in the box with Kimi Raikonnen was a pity which put a partial damper on the celebrations, but these things are part of this sport. I extend my best wishes to the mechanic for a speedy recovery.

This race must give those who disparage this Formula 1 something to think about because on a true track we saw good overtaking manoeuvres and the final ladder for the race which had twenty cars within 3” and a gap of barely 6 tenths of a second between first and second placed cars. Even though Red Bull was missing, Ferrari and Mercedes knew how to entertain by keeping us in suspense until the last lap.

The extraordinary fourth place by the Toro Rosso-Honda partnership was the result of a fantastic qualifying session by Gasly, who was also the author of a race start worthy of a champion and who exploited to the max the car and strategy by putting together a series of fast laps between the 37th and 47th laps to give himself a safety margin in the case of an attack by Magnussen.

With these premises I am anxious to watch the next 19 grands prix and in only a week the engines will be turned on again in China.

From the F1 Surtees's Cooper T51 to Formula E | Between the Present...
Scroll to top