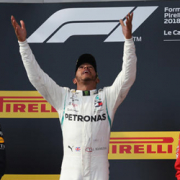 With Hamilton’s win and Vettel’s fourth place there is once more the 14 point gap between the two drivers that existed before the Canadian Grand Prix. In France the situation was turned upside down once more, this time in favour of the British driver. This is the confirmation that we are faced with a championship that will be uncertain until the end and where mistakes will make the difference. This time it was the Ferrari driver’s turn to make one.

Vettel started very well trying to attack Bottas immediately at the first curve, however they collided. It is not a matter of being caught up in the heat, above all when you run on a track where, as we saw, it is possible to overtake. It was a grand prix with a number of overtaking manoeuvres and between the number two drivers Kimi Raikonnen was not caught unprepared. In addition to overtaking a number of cars he also gained a good podium in front of Red Bull which, with Verstappen, was the protagonist of a great grand prix close behind the winner.

On paper the Paul Ricard was a race in favour of Mercedes and Hamilton’s times confirmed this, especially in light of the times set from the 23rd to the 26th laps.

It was once again a decidedly positive weekend for Leclerc who “gave” Alfa Romeo Sauber a vital point on the occasion of the Milanese carmaker’s 108th anniversary, showing that he is now ready to make a leap in quality. The moods are decidedly different at Williams and McLaren that are paying a heavy price of assessment and organization. Williams’ situation is inexplicable as, despite counting upon a fantastic Mercedes motor, it is not going through the development and growth that had been hinted at in recent years. It is surely not being helped by its two drivers. It is certainly clear that McLaren’s problems are to be found within and the prediction made by Alonso lets us understand that they are well aware of their limits. They are two of the most famous teams in the history of F1 and it is very sad to witness this involution.

We now start a very intense and hot month of July with four appointments (Austria, England, Germany and Hungary) within five weeks in which there will be no time to breathe and at its end we will have a very significant picture.

Super Trofeo, Three from three for Karol Basz who made his mark at Misano with...
Scroll to top