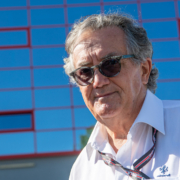 This weekend the twelfth round of the World Championship arrives at Paul Ricard, a track that encompasses in its 5,842 metres fast curves and straights that alternate between slower and technical parts. It will be run almost a month later than last year and high temperatures are expected (40°C are forecast) and drier weather. It will be interesting to see how the new 18 inch compounds and tyres will perform in these conditions with Pirelli bringing the C2 (hard), C3 (medium) and C4 (soft) compounds.

As has already happened in other circumstances, the heat will be an extra unknown factor for reliability and all the teams have tried to defend themselves by making many openings. Many innovations are expected in all the pits, a symptom that they are chasing performance but I expect a tussle between Red Bull and Ferrari. Amongst other things that I like to underline, up till now we have seen a very correct tussle on the sporting side.

Contrary to what Toto Wolff stated in recent days, I am convinced that this duel on the edge of hundredths of a second, even if it is enclosed between four cars from two teams, is only positive for the image of Formula 1. We must not forget that we have come from almost eight years of absolute domination by Mercedes that regularly placed its cars first and second place. We used to approach the grands prix already knowing who would have won, except for upsets. Therefore, these declarations left me perplexed…