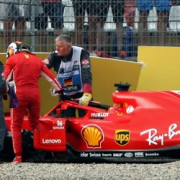 A few laps from the finishing line Sebastian Vettel threw away a win and a very important result in light of the world championship. In 11 grands prix this is already the fourth mistake made by the German and this must give Ferrari something to think about. They must be proud of the work in the factory but they have to ponder on how their drivers work. Compared to Mercedes Ferrari came out defeated.
The race confirmed that this is a season in which mistakes will play a crucial role and, once again, the the leadership changed with Hamilton taking the lead with a gap of 17 points from Vettel. He took off from fourteenth place and played the leading role with a sensational comeback that ended with a win in front of his team mate and also after setting the fastest lap time during the final stage. It was an impressive show of force by Mercedes with Toto Wolff taking back the reins of the team.
All weekend Ferrari showed that it has a truly great car but it was not enough. In seven days we will be back on the track in Budapest which will conclude the tour-de-force and usher in the summer break. It will be a good opportunity for Vettel to be on the prowl for redemption and we hope that this episode will not have repercussions on the rest of the season. On this occasion I wish Sergio Marchionne all the best for a quick recovery and to the new president John Elkann.
It was certainly a race that became exciting only with the arrival of the rain with some teams that tried to make a master stroke with strategies that did not pay off such as Red Bull and Sauber. It was choice that cost important points, especially for Sauber’s Leclerc. We anxiously await the race in Hungary.
Gian Carlo Minardi