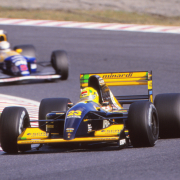 The Formula 1 World Championship Circus arrives in Japan for the seventeenth round on the Suzuki circuit, one of the world’s most beautiful tracks. This is an Old School track with many pitfalls and with no paved escape route where every mistake is punished.

This is a demanding track for both the cars and the drivers. We are coming from five years of domination by Mercedes and it will not be easy for the rivals to interrupt this positive streak, even if in the latest rounds Ferrari managed to overturn the predictions, in the hope that the team has resolved the reliability problems that conditioned the result in Russia with Sebastian Vettel’s withdrawal when he was in command.

The unknown factor is the cyclone approaching for Friday and Saturday, while the race should be dry. On the tyre front Pirelli has brought the hardest mixes, with Mercedes more conservative compared to its direct rivals. If the majority of drivers has opted for 1 set of C1s (White Hard), Hamilton and Bottas have chosen 4 mixes of C2 (Yellow Medium) against the 3 of Ferrari and Red Bull with 8 C4s (Red Soft) against the 8 of Vettel-Leclerc and Verstappen-Albon.

In recent days the internal struggle between Vettel and Leclerc has held sway. Binotto will surely know how to manage it for the best, even if it is positive for a team that aims to win. We have come into the final phase of the season with only 5 GPs to be fought that could decide the future team structure. Leclerc is young, 22 and in his first season with a top team and he has a future as a champion in front of him, while Vettel must find once more the serenity to come back and exploit his abilities to the full. I am convinced that the true referee should be the stopwatch and to leave the drivers free to fight, always in the best interest of the team.

Staying on the young drivers’ front, Mercedes and Toto Wolff have made a good move, bringing back into the negotiations Lando Norris who brought the supply of the German power-unit to McLaren. This is a nice move for both, a little less for Renault that at the moment is without client teams should it continue in 2021, even if I have my reservations.