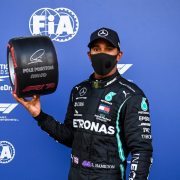 The regulations must be studied and I am surprised that at these two mistakes by a six times world champion like Lewis Hamilton. After the penalties I saw him disheartened, even if he tried to set the fastest lap but this time Bottas did not want to give him a thing.

His bad day certainly favoured the Finn and Verstappen, as well as having given us spectators a finish that had not yet already been defined.
The grand prix slipped by without too much excitement, on a track that is decidedly anonymous and does not exalt the quality of the drivers.

Effectively there was no driver in particular who put himself on show. Certainly Valtteri Bottas made himself the protagonist of a perfect Sunday during which he did nothing wrong followed by a good Max Verstappen.
I

t was also a good race by Sergio Perez who shows with results on the track that he deserves to stay in F1 despite being badly dumped by the team.

It was a difficult weekend Ferrari as well. I do not find it correct to be satisfied with Leclerc’s sixth place. The small updates introduced at Sochi were useful but the road is still long.

In two weeks we will arrive in another historic track like Nurburgring before touching two tracks which are new to this Formula 1, Portimao and Imola.