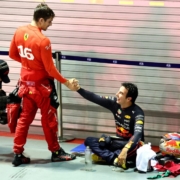 Once again the marshals and race directors have not confirmed they measure up to a Formula 1 that is growing exponentially, giving us incredible emotions. The final decision, that confirmed Sergio Perez’s win despite the 5” penalty, came several hours after the episode despite having all the tools for verifying in real time and there have already been similar episodes in the past. Guidelines are needed to give homogeneity in the judgments.

Today’s grand prix gave us incredible emotions, especially considering the conditions in which they raced. The race ended due to having reached the maximum time and not at the conclusion of the laps. This already lets us understand how demanding it was for the drivers.

I take off my hat to Sergio Perez and Charles Leclerc. The Mexican was the protagonist of a great race and an excellent start. He gave his all and in the end he went into difficulty due to having made the most of the tyres. Red Bull confirmed that the car is extremely solid and is ready to open a new cycle that can be important.

It will be interesting to understand what went wrong for the driver from Monte Carlo at the start, but then he was the author of a race above his possibilities as the gap between him and his team mate amply demonstrates. With second place Leclerc gnawed a few points from his direct rival but the real problem is the five points lost over Perez who is now only two points behind. On the constructors front on the other hand Ferrari consolidated second place over Mercedes that left Singapore with only two points to its credit.

Instead the reigning world champion’s performance was weak. After the problems that stopped him in qualifying, Verstappen had various difficulties despite the overtaking he carried out to try and climb back. The duel between Alonso and Hamilton was very good. It was a pity that he was betrayed by the engine of his Alpine, just like Ocon.

It was an excellent performance by McLaren that said goodbye to Singapore with fourth and fifth places by Norris and Ricciardo. Good Aston Martin with Stroll’s sixth place and eighth place for Vettel who finished ahead of Hamilton’s Mercedes and Gasly’s Alpha Tauri.