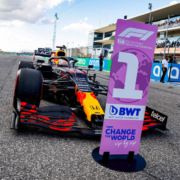 One of the best if not the best grand prix of the season with two drivers who crossed the finish line with a gap of less than a second after fifty six laps. It was a race that was run on hundredths of a second. On one part of the track Mercedes was faster while on the other it was Red Bull. Congratulations also to the organizers to bring to 400,000 people to the circuit over the three days, setting the new record.

Congratulations also to Red Bull that got all the strategies right with Verstappen who showed once again that he wants to win this title at all costs. The friction with Hamilton helped him grow and mature. Once more he worked to bring home the best result possible, the win.

The excellent work by Red Bull was completed by third place with Perez who, as a good wingman, did not attack Verstappen at the start and ended the race with an “off” Valtteri Bottas. He will go to Mexico strengthened by this result, as well as having helped the team in the constructors’ ladder.

The result was also a good omen for Ferrari with Leclerc and Sainz placing their cars ahead of their direct rivals, McLaren.

Two precious points also for Tsunoda on the Sunday that saw the retirement of his team mate Gasly but above all for both the Alpines, the direct rivals for fifth place. A thrilling end of the season can be expected with duels raced on the edge of a few points.

Yet again absurd strategy by Alfa Romeo denied Giovinazzi the satisfaction of entering the points zone in favour of Sebastian Vettel. Antonio had the pace to take the pint but once again the team wanted to favour Raikonnen who made a mistake at the end.

F1 | GP TURKEY, THE POINT BY GIAN CARLO MINARDI “VERSTAPPEN AND HAMILTON CAN...