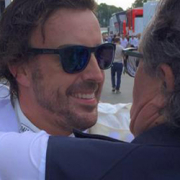 The weekend at Monza legitimized Mercedes with Lewis Hamilton also taking the lead of the drivers’ ladder at Sebastian Vettel’s expense when he could not do better than third place, suffering a further blow with the 36 second gap from the winner. Amongst the protagonists of the Monza paddock on the weekend was also Gian Carlo Minardi who gave us an exclusive interview.

Gian Carlo, after Monza has Ferrari’s hopes for a world title dried up?

Mercedes came here after two perfect weekends, backed by an important technical advantage. At Monza I did not expect Ferrari to suffer such a big gap. It can only respond to the rivals with serenity and the will of the whole team to find once more those tenths of a second to test and worry Hamilton and Bottas. It also requires a Kimi Raikonnen that does not drive off and on. In qualifying under the rain he managed to stay in front of Vettel but then lost himself in the race. The overtaking manoeuvre inflected on him by Daniel Ricciardo was disheartening. He did not even try to defend himself. Certainly the scales have swung heavily towards Mercedes, but nothing is lost. There are still many races in front of us beginning in Singapore. However, the people at Maranello also look over their shoulders at Red Bull.

Saturday at the Italian Grand Prix was the opportunity to also talk about the current freezing of the setups.

What we witnessed Saturday during the qualifying under the rain was something that should never happen. This episode was the result of a regulation that is useless, to say little, since it does not give us a greater spectacle. In fact, it did the exact opposite as we all saw with the more than two hour delay and brought no financial relief to the teams (always a current theme in F1). There are tyres for the rain; there must be the chance to modify the setup according to the climatic conditions. At Monza the situation was exaggerated as the qualifying could not begin until the track was absolutely dry. I must congratulate the public that patiently waited the proper running of the event.

This is another regulation that must be eliminated or modified. Reading that a driver was penalized 35 positions (when it goes well) in a grid made up of 20 cars makes me laugh. It is ridiculous that a driver has to pay a technical mistake. He would already be annoyed because he could not finish the qualifying and then be forced to start the race practically at the back of the grid. If they really want to keep this regulation then the team should pay with the reduction of points in the constructors’’ ladder or with a fine. The system must be totally reviewed because it falsifies the forces in the field and the results. At Monza, without the penalty to Red Bull we would have seen a very different result and other colours on the podium. I will also say another thing: Mercedes, with the technical advantage it has, can allow itself to change the power-unit, start at the back and arrive in any case on the podium. It does not seem very sporting to me.

We saw a great hug between you and Fernando Alonso

We saw each other Saturday at the end of the free practice when he had just set the seventh fastest time. We joked on how he managed to set that time. I saw him very calm despite the troubles he is passing through. It is always a pleasure catching up eith him, even though unfortunately we could not stay together long due to his many commitments.

Did you meet the new owners?

I had the pleasure to meet and get to know Chase Carey, a very expansive person who expressed appreciation for my work with the Automobile Club on the occasion of the parade. There is much that can be improved, but it was a wonderful experience, just as they need to update some of the structures at hte Monza circuit. I touched the changes made by Liberty Media, such as the new boardwalk at the entrance to the circuit that allows the fans to meet the drivers who participate.

It was a weekend full of emotions. I was pleased to see many friends such as Jean Todt, the President of the Federation, Jean Alesi and Ermete Amadesi, the father of the Leoni brothers of the CEA who at Monza celebrated their 50th birthday, together with many others with whom we discussed F1. In addition, it was the chance to have a small get together with Paul Stoddart, Patrick Freisacher and Zsolt Baumgartner – who drove the two-seaters guests drove in – and Gabriele Tredozi, my former engineer.

F1 | McLaren-Honda, the announcement this week

GT Italy | Karol Basz once more on the podium at Imola after an incredible...
Scroll to top