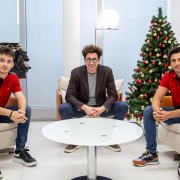 Carlos Sainz wasted no time. After the adventure with McLaren he has already arrived at Maranello to prepare the seat and to get to know the men with whom he will share this adventure in Ferrari.

Maranello closed one of the worst seasons in its history not finishing above sixth place in the constructors’ ladder and the time to find a remedy is truly little, as are the tokens available to the teams to develop and improve the racing car in what will be a year of transition awaiting the change of regulations scheduled for the 2022 season.

“Ferrari is certainly experiencing a very difficult period and in these few months that separate them from the first race in Australia they will have to try and sharpen their weapons to try and leave a disastrous season behind them. Unfortunately, this is the only sport that does not require training and next year there will be only three days of tests,” commented Gian Carlo Minardi at the microphones of Minardi.it

“Binotto however will be able to count on the best pair of drivers in the circus, also in terms of yield of points. Leclerc and Sainz have all the right cards to put together good results,” continued the manager from Faenza.

2021 will also be the year of the introduction of the budget cap. “The way it has been conceived is nothing short of ridiculous. It serves no purpose except to bring about a small reduction in the team’s staff. With the possibility of three extra-budget items the top teams can allow themselves the best driver, the best engineer and the best research. If you really want to make it work you must include all the items, without exception. At that point you leave the team free to take to the track to try and spend the money as it sees fit,” concluded Minardi.

GIAN CARLO MINARDI APPOINTED PRESIDENT OF THE IMOLA CIRCUIT “I AM HONOURED...
Scroll to top