Blog - Latest News
You are here: Home / F1 / F1 | Minardi “Ferrari and Red Bull on the prowl for Mercedes” 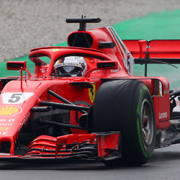 Ferrari said goodbye to the tests in Spain with both its drivers at the head of the ladder and strengthened by the record time set by Sebastian Vettel with the HyperSofts (1:17.182) followed by Kimi Raikonnen 39 thousands of a second behind (1:17.221) and 929 laps on the board and 4,324 kilometres run during the eight days of tests.

McLaren-Renault closed in third place with Fernando Alonso who on the last day struck a blow by breaking the barrier of 1:18 with Pirelli’s softest mix (1:17.782) in front of Daniel Ricciardo (1:18.047) who with the Red Bull covered 1,694km which then become a total of 3,644 with the work carried out by Max Verstappen.

“This is a ladder that does not reflect the forces at play, even if the good reliability reached by nearly all the teams and the coming together of the times emerge. Despite Ferrari’s times, the declarations made by Mario Isola regarding the gap between the various mixes together with the work programme carried out by Hamilton and Bottas (who ran mainly with the Medium tyres) show that Mercedes once more has an extra gear compared to the others. We also need to keep our eye on Red Bull which, in my opinion, did not show its full potential. There will be another head to head with Ferrari,” commented Gian Carlo Minardi.

TORO ROSSO the surprise. MCLAREN and SAUBER the disappointments

“In less than two weeks in Melbourne the teams will be called to show their cards and we will have a more detailed picture of the situation,” continued the manager from Faenza who was surprised by Toro Rosso and the many kilometres completed by its two drivers, but disappointed by McLaren and Sauber, “Despite the temperatures that were certainly not high McLaren had a number of heating problems even having to change to power units. After the changes at Sauber with the addition of new technicians and the arrival of the 2018 Ferrari PU I expected a smaller gap”

THE POWER UNITS: STRATEGY WITHIN STRATEGY

Before finishing his intervention the manager from Faenza pointed out another aspect that will play an important part in the season. “In addition to the strategies tied to the mixes and fuel consumption it will be interesting watching the movements of the motors. Some teams could use one or more units than the three allowed by the regulations for each driver – certainly running into penalties – but being able to exploit better the motor means having more potential on hand,” concluded Minardi.

F1 | Gian Carlo Minardi “Mercedes has no rivals. At Barcelona it can...

The Bandini Trophy and the Minardi Day together on the weekend of May 5th and...
Scroll to top