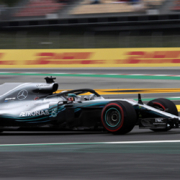 Lewis Hamilton and Mercedes dominate the Spanish Grand Prix with Valtteri Bottas who completed an excellent performance in second place in front of Red Bull’s Verstappen.

We had already understood from the beginning of qualifying that we faced a weekend that would not be easy for Ferrari and the result of the race and lap times were the proof. I do not believe Ferrari made a mistake in its tactics by calling in Sebastian Vettel in the 42nd lap as he already had tyre problems.

The fourth place leaves a bitter taste in the mouth, even though they leave Barcelona with some points. Kimi Raikonnen’s retirement was a pity. It was a grand prix chasing Lewis Hamilton who lapped with important times which left a gap of 20” between him and his team mate, to which must be added another 6” to find Verstappen and 7” to Vettel. Bravo for the Dutchman who, despite the contact when he overtook Sirotkin and the damage to the rear spoiler, managed to bring home third place at the expense of the Ferrari driver who mounted fresher tyres.

This weekend Pirelli opted for the newer mixes with a 4mm lower tread which we will find once more at another two grands prix, one of which is Silverstone. Honestly, I do not understand this technical alternation that destabilizes the progressive development of the cars since a lower tread also affects the other aerodynamic parametres.

It will be interesting to see if, in the next few rounds (Monte Carlo, Canada and France) in which the traditional tread will make a comeback, the gaps between cars will be confirmed. What is certain is that in the race Mercedes confirmed the supremacy it put on show in qualifying and the winter tests.

Behind the top three teams Magnusson, Sainz, Alonso (who came back from his first WEC win on the Spa track), Perez and Leclerc won important points. In two weeks Monte Carlo will host the F1 Circus and Ferrari must try to take back the ground it lost here in Spain.

9.000 people decree the success of the Historic Minardi Day with special guest...

Karol Basz is part of the 2018 Lamborghini Young Drivers Program and is getting...
Scroll to top