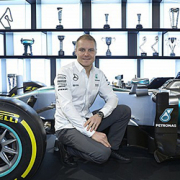 With his win in Austria, the second of the season after the triumph in Russia, Valtteri Bottas has put himself just behind his team mate in the driver’s championship with his tally of 136 points against Lewis Hamilton’s 151. These points are also the fruits of the podiums he occupied with the third places in Australia and Bahrain and the consecutive second places in Canada and Azerbaijan. In the first nine appointments of the world championship he only failed to see the chequered flag in Barcelona.

“I was pleasantly surprised by Bottas’ first part of the season. Faced with Lewis Hamilton’s problems he was always ready,” commented Gian Carlo Minardi, “He is making the difference by giving a vital contribution to the Mercedes team in terms of points for the constructors’ title,” continued the manager from Faenza who at the beginning of the season had not seen Tom Wolff’s choice with a good eye. “I have to step back. Bottas is surely a second driver, but he is putting himself on show by finding himself a short distance from the British champion (editor’s note: fifteen points behind).

He is setting pace with which he is contributing to keeping Mercedes at the top the of constructors’ ladder in front of Ferrari. “He is doing what Kimi Raikonnen is not doing for Ferrari. The team from Maranello has the chance to fight for the constructors’ title, as I already pointed out at the beginning of the season, but he needs the Finn’s contribution. Even Red Bull has failed, closing behind the two drivers from Brackley and thus allowing Mercedes to pull ahead in the ladder. Valtteri is worthily taking advantage of all the opportunities in search of a contract renewal,” concluded the ex owner of the Minardi Team.

F1 | Silverstone, Minardi “It’s a track for Lewis, but Ferrari is a...