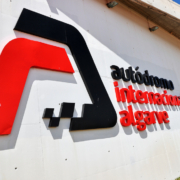 Having said goodbye to Imola Formula 1 continues its journey in the old continent stopping this weekend in Portugal on the Portimao track for the third round. Lewis Hamilton and Max Verstappen are separated by only one point with a win each and I hope that this head to head could be a constant factor for all the season.

Last year Portimao entertained us like Imola did two weeks ago which shows that the “historic circuits” represent a guarantee for F1 where the unexpected is just around the corner. We are faced with a season that is particular and of transition as we await the new regulations in 2022 but also full of novelties such as the Qualifying Race (a 100km race) which will makes its debut soon at Silverstone. This is certainly an important signal that could change the panorama of F1 on both the technical and sporting sides. Important scenarios can be opened and must be welcomed in a positive way. We can draw the conclusions only after having tried it.

At Portimao it will be interesting to see the forces on the field we saw in Imola will be confirmed, beyond the supremacy between Mercedes and Red Bull with a good struggle between McLaren and Ferrari for third place. From the first grands prix a big gap between the two top teams and the rest of the group has not emerged.

Amongst this year’s novelties the teams and FIA are gaining confidence with the budget cap and the checks carried out but the rest of the idea which, even if it is an important and interesting tool, it must be changed. To really see the results it will be necessary that all the items must be included, without exception.

F1 | GP PORTUGAL, THE POINT BY GIAN CARLO MINARDI “BOTTAS CONFIRMS HE IS A...
Scroll to top