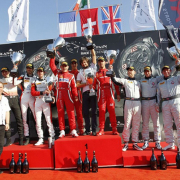 After the Blancpain Endurance Series’ second racing weekend at Silverstone, the manager from Faenza Giovanni Minardi has talked about Davide Rigon, focusing on the driver’s technical skills, thanks to that he has always driven successful Championships “Davide is a very talented driver, but he’s misunderstood by racing specialists. He’s a very good person and a very skilled driver. Drivers like Alonso, Vettel, Rosberg or Hamilton aren’t any better than him”, says Minardi who celebrates his motorsports management society’s 10th anniversary this year, “ Despite he’s one of those non-paying drivers , he has always won all the Championships he has taken part in, only relying on his skills.”

The 26-year-old guy from Vicenza started his career by winning the F.Azzurra open-wheel Championship in 2005. The following year he became F.3 Italia’ s deputy-champion and scored a double win in the Italian and European F.3000 Championship in 2007. In 2008 he also took part in the Spa 24 H race for the first time, as a FIA GT World Cahmpionship’s driver, driving a Ferrari. He won the Belgian famous competition before winning the Superleague Formula in 2010 “The only Championship he has never raced in is the GP2, because of misfortune. In 2009, it was a turn of events that didn’t allow him to hit the big time. In Montecarlo, for example, he finished 9th in race-1, almost getting the pole which was assigned to the driver who finished 8th”, remembers the manager from Faenza  “If he had started from the pole in race – 2, he would have almost certainly won the race. We know that Montecarlo gives you different opportunities. In 2011 he was in a very good shape, as he demonstrated during winter testing. Unfortunately he drove a very unlucky first race, as he broke his fibula and shinbone as a consequence of a terrible accident. Due to that, his racing season was over. Filippi, who is a fast driver, just like Davide, replaced him. The driver from Savigliano dominated the Championship. If the driver from Lugo di Vicenza had raced the whole season, he would have won even this Championship to Grosjean’s detriment. The Frenchman entered F.1 that year and he’s still a top category’s driver. “

Giovanni also focuses on another important issue “Davide’s greatest misfortune is that he’s Italian. If he weren’t Italian, he would have been a F.1 driver for a few seasons. In Italy nobody invests on young drivers and sport in general. Only the Minardi Team did that. Luckily today there is the FDA program that is dedicated to young drivers.  The FDA has two good drivers who are achieving good results. Unfortunately the program started a little bit late, but I think it will soon begin to bear fruit.”

In the Blancpain Endurance Series’ first racing weekend Rigon, alongside his teammates Cesar and Daniel, led the Ferrari 458 to success “It was a great victory and he drove an almost flawless weekend. He was consistently the fastest driver on track and kept an unbeatable pace throughout the race, without making any mistakes. He’s in a very good shape. He fully recovered from that terrible accident. It will be hard for any other driver to get a leg up on him. He really deserves to get the brilliant results he used to get and demonstrate that nobody’s better than him in every Championship”, ends Giovanni Minardi.

Minardi “Yes to F.1 tests but with a rookie driver alongside the regular ...