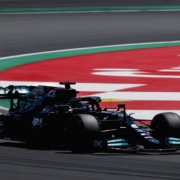 Even if there was no need for confirmation Mercedes and Lewis Hamilton gave a new demonstration of their supremacy by winning the Spanish grand prix ahead of a just as excellent Max Verstappen who with the Red Bull tried everything to try and overturn a difficult situation.

Just like in Portugal we again witnessed an excellent duel, this time in three between Verstappen, Bottas and Perez, for the point for the fastest lap. This time the Dutchman did not miss the appointment leaving his team mate more than a second behind.

It was a GP that again saw Bottas lose the challenge with his team mate, paying a major gap, even if the number two driver brought home his “homework” of taking points away from his direct rival Sergio Perez. At the moment he cannot do more than this.

It was a masterpiece race by Leclerc who was the protagonist of a stupendous start in which he got the best of the Finn crossing the finish line in fourth place with a Ferrari that is growing but still pays about eight tenths per lap compared to the Mercedes. The driver from Monaco puts much of his own into it as the gap with his team mate showed.

The careless mistake made by Alfa Romeo during Giovinazzi’s pit-stop was incredible. It was a mistake that is rarely committed in lower categories. In this circumstance the mistake was made in both the preparation and the check of the set. In addition, not even the second set was ready. It was a festival of mistakes and always at Antonio’s expense. It was sad because his rhythm was superior to Kimi’s and he could have put himself into the fight for tenth place.

We file away a good weekend that, in addition to the excellent challenge between Hamilton and Verstappen, gave us very hard fought qualifying sessions, especially in Q2 with 14 drivers enclosed within barely 1”.

I look forward to Monte Carlo where I expect many drivers enclosed with the space of a few tenths of seconds. We all know how important qualifying is amongst the streets of the Principality.

F1 | GIAN CARLO MINARDI “NORRIS-MCLAREN THE SURPRISE OF THE START OF THIS...

F1 | GIAN CARLO MINARDI “MAZEPIN’S ARRIVAL IN F1 WAS TOO EARLY BUT GIVE...
Scroll to top