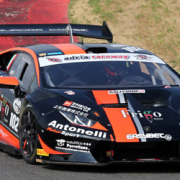 The Mugello circuit will close the Karol Basz’s debut season in GT with the seventh and final round of the Italian Gran Turismo championship. After having missed the Vallelunga round due to a clash with the CIK FIA kart world championship the Polish driver will once again be at the wheel of the Antonelli Motorsport team’s Lamborghini Huracan Super GT Cup with which he put himself in the spotlight in his first race by taking pole position in the debut weekend at Imola’s Enzo and Dino Ferrari circuit and going on to take podium finishes and collecting points.

It was in July on the demanding Tuscan circuit in the fourth round of the Italian championship that Karol convincingly took the podium in both races with second and third place in race 1 and 2 respectively, gathering a harvest of twenty seven points of the season’s sixty eight points.

“I am really happy to be able to close my first season in GT at Mugello. It is a track I like a lot where I had one of the best weekends of the season with the double podium. I am ready and after having missed the round at Vallelunga I am anxious to get back behind the wheel of the Lamborghini. It has been an intense and positive season which I will try to close in the best way possible,” commented Karol Basz.

“We are coming to Mugello after nearly a month away from GT racing, but Karol is determined to close the season in the best way after the disappointment in the kart world championship. He put a lot of work into the simulator and we hope to file away the first season with a deserved win after two podium finishes in July. The car has always performed well and Karol really likes the track,” was the analysis of managers Giovanni Minardi and Alberto Tonti.

The green light for race-1 will come on at 5.05pm on Saturday 7th while the curtain will come down on the season in the second race scheduled for 12.35pm on Sunday 8th.

F1 | Gp Malaysia, THE POINT by Minardi “An opportunity lost for Ferr...

F1 | Gp Japan, Minardi “Vettel must find his peace of mind once more...
Scroll to top