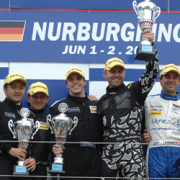 Perfect racing weekend for Bhai Tech Racing. The team scored an amazing double win in GTS at Nürburgring. The Italian team based in the advanced factory of Mestrino (Padua) and directed by the engineer Mr. Roberto Costa, drove an almost perfect racing weekend, leading both McLarens MP4 12C driven by Pantano/Suzuki and Van Der Drift/Razia to the first and second place of GTS, in the two races which made up the third event of International GT Open Championship.

In the two races, which were both run in the dry, the four drivers equally shared out the first and second position, which is the 4th place overall. At the end of the 70’ race on Saturday afternoon, the #66 Brazilian and New Zealander racing crew almost got the podium, finishing 4th overall ahead of the Italian and Brazilian duo, scoring the GTS class double win.

In the Sunday’s event it was the duo Pantano /Suzuki who won the race, followed by teammates who respectively finished 4th and 6th overall.

“It was a fantastic weekend as we achieved good results, but it was also very intense, as we were very tight on time. There was only 1 hour break between the two qualifying sessions and race-1. So I want to pay our staff and drivers many compliments on their performances as they all were fantastic”, says the technical director Mr. Roberto Costa “We had a good race pace in the first two races, even if the track’s low temperature condition didn’t help us. We had to deal with a completely new situation as we got a handicap in race-2. We managed to handle the handicap very well as we know our race pace.”

The development work at the factory is bearing fruits and the team is going to the right direction “The work done at the factory between the Portimao racing weekend and this one was really important. Anyway, we will continue to develop the car as we have to improve in every sector. This is the reason why we’ll go to Jerez on Saturday 8th to drive a 3-hour- testing session, to get ready not only for the next racing event (to be held on the Spanish track) but also for the following racing weekends”, comments the Brazilian engineer “Success like the one achieved in Germany is an incentive to continue to work and progress”, ends Mr. Costa.

Much work on the simulator to Rigon

Rigon keeps the leadership at Silverstone
Scroll to top