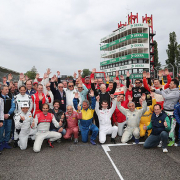 Thanks to the single ticket that can be bought at the Circuit and through TicketOne that gives access to all the most exclusive areas of the Santerno track such as the paddock, the pits and the terrace to see up close more than 30 Formula 1 racing cars together with cars from F2, F3, Prototypes, Supercars and Hyperc, Gran Turismo, over the two days Imola’s paddock and pits will host the most important names of international Motorsport scene including Formula World Champions, winners of the 24 Hours of Le Mans and also the F1 GRAND PRIX DRIVERS CLUB

TICKETS
Tickets can be bought at the entrance – Saturday 27/Sunday 29 or for the whole weekend through TicketOne or directly at the Circuit. The ticket will give access to the paddock and the pits of the Enzo and Dino Ferrari Circuit and the events in the Circuit, as well as for carrying out laps of the track aboard a sports car driven by professional drivers.
SOCIAL MEDIA & WEBSITE
To always keep up to date with the many developments of the Fourth edition of the Historic Minardi Day visit our website and the social media channels using the official hashtags #HMD and #HistoricMinardiDay
All the addresses:
WEBSITE:
http://minardiday.it/
FACEBOOK:
https://www.facebook.com/minardiday/
TWITTER:
https://twitter.com/minardi09