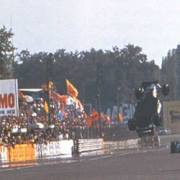 As it often happens, even this year Monza represents a clear dividing line for those teams like Ferrari, who strive for important goals. It’s time for the Maranello-based team to bridge the gap with Sebastian Vettel and Red Bull. This is only one of many reasons why the Italian GP is really worth attending.

F.1 arrives at Monza, which is the fastest circuit of the Championship and also one of the most historical ones, along with Silverstone. Both circuits have contributed to write the history of motorsport. Monza is a very fascinating circuit not only for Italian people, but also for foreigners. I hope that it will bring Alonso and Massa good fortune and I also hope that the audience will be friendly and support the Italian team the best way.

The Italian team has to regain points in order to leave the Championship open, but we don’t have to forget that 7 GP are yet to be contested. If the two Ferraris are competitive in the Sunday GP, the Italian team can be candidate for the title, as the Monza circuit usually doesn’t suit Red Bull very much, if they’re not, it will be difficult for them to be candidates for the title. Starting from next season regulations will be upgraded, so it will get more and more complicated and demanding to work on both sides.

In the Pirelli era we’ve seen how easy it is to see a car improving its performance level or getting it worse, so some new outsiders can come out: Force India, McLaren, and Toro Rosso. The latter sealed its first win with Vettel in the 2008 F.1 Championship. There are many factors that influence the Italian GP: the track’s first chicane and car’s reliability, as the track will be taken at full speed for most of the time. So, outsiders will be just round the corner, but if we better analyze the season, I expect Red Bull and Ferrari to fight against each other.

As far as Toro Rosso is concerned, Red Bull has announced that it will sign Daniel Ricciardo to replace Webber. No doubt it’s a great reward for the 24-year-old driver who, along with Vettel, makes the youngest pair in the F.1 World Championship. The pair represents the continuity of the “Red Bull School”.

I don’t have any particular memories linked to the Minardi Team at Monza, as our propellers’ power was lower than the average. We got some good results in terms of placing. The most resounding episode is dated back to 1993 (7th and 8th), when Fittipaldi, swallowed up by the contrail of Martini’s car, hit the team mate’s car and crossed the line in the air. Luckily the driver was harmless. People kept on talking about that spectacular accident for a long time.

Bhai Tech at Spa-Francorchamps to keep the leadership