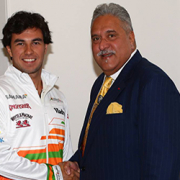 Nico Hulkenberg has his team mate. It’s the Mexican driver Sergio Perez, who, after racing alongside Sauber and McLaren, has joined Force India to partner Nico Hulkenberg.

It’s an all-new driver pairing for the Vijay Mallya-owned team, who gets ready to run a 2014 season which is full of unknown items– because of the several technical changes which have been introduced – .  The new pairing is made up of two young drivers who stood out over the last few F1 seasons. Both Nico Hulkenberg (born in 1987) and Sergio Perez (born in 1990) drove an interesting second half of the season. The ex-Sauber German driver led his team up to the 7th place (one position behind his new team) and the Mexican got the better of his World Champion team mate Jenson Button many times, finishing 11th in the drivers’ championship.

“In view of the new technical changes, Force India wanted to change its driver line-up and rely on two young drivers such as Nico and Sergio. If the team’ s performances are as good as they were in the last few seasons, the team can strive for getting a good position in the constructors’ championship, thanks also to the Mercedes’ engine”, says Gian Carlo Minardi.

“I’m really happy with this announcement. Force India has always been my first choice. I want to say thank you to Vijay and to all the team for giving me this opportunity. It’ a young and very determined team who has built competitive cars. Due to regulations changes, many things will change next season, but I have a good feeling about 2014. I’ll soon go to the factory to meet the staff”, says Sergio Perez.

Sutil joins Sauber for the 2014 F.1 season
Scroll to top