Blog - Latest News
You are here: Home / Championships / Rigon at the wheel of the Ferrari F138 in the Young Driver Test at Sil... 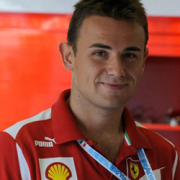 Starting from today, until Friday, Davide Rigon will take part in the young driver tests at wheel of the Ferrari 138. This is the second year the talented Italian driver takes part in the event. The Ferrari cooperator since 2011 will give way to Massa on Friday morning, to test the new Pirelli tyres.

This decision will allow Davide to focus on the car technical development and will give Massa the chance to spend more time inside the cockpit in the attempt to release him from the German GP.

The tyre test program, which is open to official drivers as a result of a dispensation granted by the Federation as a consequence of the problems aroused at Silverstone during the GP which took place on June the 30th, is planned by the Pirelli upon the approval of the FIA. Drivers will have a limited number of tyre sets at their disposal.

The Blancpain Endurance Series leader gets back at the wheel of a Ferrari F1 car in an official event, after the great job done in the last season, during which he took part in one of the three test days, alternating the wheel with Bianchi, who is now a Marussia F1 team’s driver.