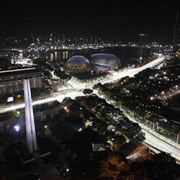 With the Monza GP, the F.1 Championship has left Europe, seven more races outside the ancient continent are scheduled for the next months. The first one is the Singapore GP to take place at the Marina Bay Street Circuit this week end.  It’s a street circuit and it’s not an ordinary one for F.1 both because the GP is raced at night and because safety car is traditionally deployed during Sunday race. That is due to the circuit’s features: walls and very few escape hatches. Some drivers’ supremacy could be void. So, good fortune will play a key role, especially if tyre shift will be done in the right moment in the case the safety car will be deployed. What is more, due to weather condition and the high temperatures of the asphalt, Pirelli tyres will play a key role again, as they will be probably subject to sudden degradation.

Many aspects can affect the final result, so they have to be kept under control. The Singapore GP represents for Ferrari the last chance to keep on playing the role of a 2013 title contender, before giving itself up to the 2014 season. We’ve seen how competitive Red Bull is in any situation, so, despite many upgrades will be made, it won’t be easy for other teams to stop its supremacy without an external “support”. Mercedes can bother Red Bull and Ferrari for what concerning the competition for the 2013 title, while Lotus is undergoing a financial crisis as proved by Kimi’s return to Ferrari and many technicians’ exit.

As far as the Championship’s outsiders are concerned, all eyes are on Toro Rosso and Sauber, which both delivered good performances at Monza in qualifying and during the race. The Faenza-based team will make further upgrades to try to get higher positions until the end of the season. The Italian team is also working on the new car. I’m glad to point out that in this venue, the “made in Italy” will not only be represented by the Maranello-based Scuderia, but also by a Forlì-based company who will be responsible for lighting up the Singapore’s night race, the DZ Engineering.

Leaving Europe, all teams will have to face a further snag, which is linked to next venues’ geographical position, which makes aerodynamic upgrades very difficult to be made, because of some logistic problems. The final part of the season will be so intense.