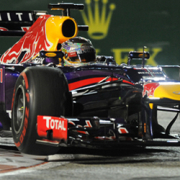 Sorry for the delay but, despite a comfortable and quick journey back to Italy, I landed yesterday in the morning, so I didn’t have time to talk about the GP immediately after the race. Before analyzing the Singapore GP, I’d like to talk about my experience in Singapore. It’s been fabulous to live a one-of-a-kind experience, which is completely different from any other F.1 racing week ends both for the night background and for the Paddock opening hours. The circuit opens at 3pm and closes at late night, so race enthusiasts have the time to visit the city, which is full of modern buildings. Me too, I had the chance to live that city as a tourist. What is more, it’s an honor for Italian people to see an Italian company (DZ Engineering) taking over the management of the whole track lighting system, all the audiovisual and safety control equipment. It’s a huge circuit, even bigger than the Montecarlo’s.

As far as the race is concerned, I had the chance to see cars and drivers in action from two different perspectives.  In particular, I had the chance to appreciate all drivers in action on the first hairpin after the finish line, especially Alonso’s amazing start. It was a breathtaking manoeuvre. He analyzed the video of the past season and arbitrarily planned to do that manoeuvre. He managed to do that the best way. We don’t have to forget that he Spaniard was able to do that with a 180 kg- gas- load on board…..It was also very impressive to see how easily Sebastian Vettel tackled that stretch of the track; it was like he still had room for improvement. Unless something unordinary happens (which is unlikely), the situation won’t easily change. Beyond his predominance from the technical point of view, I would like to applaud Vettel also because he is always able to handle his Red Bull the best way, unlike Webber (even if I think he’s a fast driver).

Despite an unlucky Saturday for Ferrari, Alonso and Massa scored some points which placed the Italian team ahead of Mercedes. Once again the Spaniard didn’t resign himself to the Red Bull’s predominance, displaying all his determination until the end. Felipe delivered a good performance; the Brazilian scored important points for the team. It was his first race after his official departure from the Italian team. Despite the strategy he carried out was different, he managed to recover. It’s a great result…Kimi Raikkonen drove an excellent race; despite he had a backache, he was author of a great recovery, confirming Ferrari’s excellent choice.

Once again Nico Rosberg gave troubles to his teammate. I liked his way of driving very much and his performance level was higher than Hamilton’s throughout the week end. Mercedes goes on delivering good performances in qualifying; for what concerning the race, the fact the team has two drivers of the same level, is an added value in terms of points. That should make us think about Ferrari’s choice, even because Mercedes will be a very competitive rival next year.

McLaren improved its performance level a little bit, but this is an unlucky season for the English team. The two drivers’ confirmation for the next season is a symptom of continuity, the project will gain substance starting from 2015, which is the year Honda will become the official engine supplier.

Hulkenberg and Sutil close the top 10. Despite Sauber’s encouraging results over the last races, I don’t think the Austrian team will bother the Toro Rosso’s seventh place as, except for some unordinary event to happen, the two teams’ gap is 12 points and each GP only one or two points are made available (9th and 10th place). What is more, the Faenza-based team proved to be very competitive in qualifying, even if a mistake made by Ricciardo during the race frustrated all the work done until that moment.

Davide Rigon ready to compete in the 1000km of Nurburgring

Singapore GP – UP & DOWN
Scroll to top