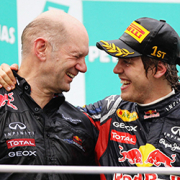 Waiting for the Korean GP, the F.1 Championship’s 14th event to take place at the beginning of October, I would like to bring back all the wonderful memories linked to my experience at the Marina Bay Street Circuit and make some remarks about the Singapore GP, which I’d like to share with you and try to find some answers.

I will start by saying that I was enthralled by the Singapore background. It was a brand new experience, which was completely different from any other experience I was used to live (the circuit opens only in the afternoon and closes at late night). I had the chance to monitor all drivers’ on-track deeds from a suite located at the end of the pit’s straight (which leads to the first chicane). The monitor I used to watch the race displayed also all drivers’ laptimes.

Since I left Singapore, I’ve been keeping in my mind the 2.5 sec advantage of Vettel over his teammate Webber and the other drivers.

INTRODUCTORY STATEMENT: By this statement It’s not my intention to devalue Sebastian Vettel, who always manages his Red Bull the best way and I don’t want even to jab at anyone, I just want to tell what I personally saw and heard during that three-day-event.

According to my experience, I think that a 2.5 sec advantage each lap is really too much. It’s like a three-generation- development gap, it’s a huge gap. Furthermore, the time gap between Vettel and Grosjean in FP3 and the Red Bull’s driver and Rosberg in qualifying was only few tenths. The German driver could have played cat and mouse on Saturday, anyway, something is still not clear for me.

DOUBT 1: from my suite, I chose some mainstays as a reference point in order to monitor and compare the drivers’ way of driving. My mainstays were the kerbstones located on the corner which leads to Republic Boulevard. Their function is to avoid passing on the kerb. I was impressed by Vettel’s neat way of driving on that stretch of the track. He was able to drive all that stretch without making any corrections, unlike all his rivals (also his teammate). His laptime was also remarkable in T3, which is the track’s sector with the highest concentration of corners.

DOUBT 2: on the same stretch,  Sebastian was able to speed up 50 m before any other driver, Webber included. Whilst all the other drivers speeded up on the same stretch, Vettel was able to speed up before them. The thing that surprised me the most was the RB1 engine’s output sound. Besides speeding up 50 m before any other driver, the Renault engine of the German’s car grinded like no other French engines on track, neither like Mark’s. That sound was similar to the sound made by the engine when the traction control system got into action in the past seasons.

Furthermore, that sound was only heard when Vettel chalked up his excellent performances. For example, after the safety car went off, he took a great re-start and chalked up many excellent laps, gaining a 32 sec. gap over Alonso, then he leveled off, taking precautions in the case he would have had to pit one more time. In those moments the Renault engine was more powerful than any other engines (Renault and other brands).

There are some aspects (1- Vettel’s very neat way of driving; 2-Vettel’s speedup 50 m before the other drivers; 3- the abnormal sound of the RB1’s Renault engine; 4- Vetter’s more than 2 sec. advantage over the rivals ) that make me think and I would like to have some answers. All those doubts are even more serious if we consider that Webber wasn’t able to do that, since he’s a common human being….I don’t want to blame anyone , I just would like to get into the deep of the matter.

Singapore GP – UP & DOWN

Face to face with Davide Rigon: "At Monza to race in the GT Open Championship...
Scroll to top