Blog - Latest News
You are here: Home / HMD / The engines are warming up for the fourth Historic Minardi Day 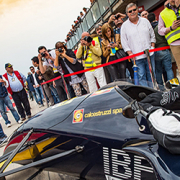 Saturday 27th and Sunday 28th April the Enzo and Dino Ferrari International Circuit will be the stage for the fourth Historic Minardi Day, the event that rewrote the rules of sporting events by focussing on the fans and enthusiasts, that was conceived and designed by Gian Carlo Minardi together with brothers Giuseppe and Ferdinando, son Giovanni and brought onto the track alongside Formula Imola.

There are many confirmations, such as the single ticket that gives access to the most exclusive areas of the track beside the Santerno Rover such as the paddock and the pits to see up close the racing cars (F1, F2, F3, Prototypes and Hyperc, Gran Turismo) to meet drivers and engineers and to the terrace to experience as a protagonist the weekend dedicated to international Motorsport and many new developments.

THE HISTORY OF F1 RETURNS TO THE IMOLA TRACK
The key moment of the weekend will be the exhibition on the track of the Formula 1 cars that will return to race around the 4,909 metres of the Imola track. More than 30 F1 racing cars for a 50 year trip in time, starting with the Cooper Maserati T51 of 1959 up to the Toro Rosso STR03 in which Sebastian Vettel won his first grand prix in 2008, passing through the 1972 Tecno, the March 761, the six-wheeled Tyrrel P36, the Theodore TR1, Keke Rosberg’s Fittipaldi F8, James Hunt’s Wolf WR7, the Minardi cars of Alboreto, Martini, Bruni, Baumgartner and Sala, the Ferraris of Alboreto, Alesi, Ickx and Merzario, Lauda, Regazzoni, Mansell and Berger, the McLaren MP4/5 B of Ayrton Senna and Berger, the Williams of Rosberg, Patrese, Senna, Hill and Coulthard, the Arrows of Verstappen, De La Rosa and Cheever, the Dallara-Consworth 190 of Pirro, De Cesaris and Morbidelli.

THE CHAMPIONS OF MOTORPORT AND THE F1 GRAND PRIX DRIVERS CLUB
Over the two days Imola’s paddock and pits will host the most important names of world Motorsport stage including Formula 1 World Champions and winners of the 24 Hours of Le Mans.

GATHERING OF MARTINI RACING AND THE LUCCHINI MEMORIAL
The Imola Circuit’s paddock will embrace the history of “Martini Racing” in the first Martini Racing gathering with spectacular cars labelled Lancia and Alfa Romeo, including also the Lancia Beta Montecarlo and Lancia LC1 of the Gino Macaluso Foundation.

The paddock will be enhanced with the gathering of the Lotus Elise S1 and the prototypes of the constructor of Mantua that will return to the track for the 2019 Giorgio Lucchini Memorial organized by the Scuderia Tazio Nuvolari.

HOT LAPS OF IMOLA
As well as taking to the track with your own car for free practices laps (subject to registration on the official website), the Historic Minardi Day will offer you the chance to try the thrill of a lap of the Santerno aboard a fantastic Supercar beside a professional driver, including Lamborghini, Alfa Romeo with more than 500cv and Pagani and Dallara Stradala thanks to the participation of Andrea Levy, president of the Parco Valentino, the automobile salon to be held in Turin from the 19th to the 23rd June. “Gian Carlo’s event is a wonder and I recommend it to everybody. Seeing the F1 cars, of all periods, together at Imola… I’m already getting chills. I saw the Ferraris of Mansell, Alboreto and Prost, and then last year there was the Mercedes with Bottas. It was wonderful to find once more those sounds, those smells.

I will come to the Minardi Day with my cars. With Gian Carlo there is esteem and friendship. When I spoke with him about the setting of this fantastic track I asked him “Why don’t you bring a few F1 cars to the city centre at the Parco Valentino in Turin , in Via Roma? For which, let us take to the track, which is right where the cars must be and then we will go to the city centre for a parade.”

In conjunction with the sessions dedicated to the Formula 1 cars, you will be able to experience the emotion of racing at more than 300 km/h on the Santerno Track thanks to the FA1x2 Seater labelled Coloni Motorpsort equipped with a Gibson Technology V8 engine capable of 550 CV. It is possible to book a lap by filling in the specific form

APPOINTMENT WITH THE AUTOMOBILE BOOKSHOP
After last season’s success there will be once more the appointments with the Libreria dell’Automobile (Automobile Bookshop) at the Ayrton Senna Conference Room (ground floor to the left of the bar – Checco Costa Museum) with the presentations of the extraordinary volumes signed by Pino Allievi, Mario Donnini, Paola Rivolta and Umberto Zappelloni, Giorgio Nada Editore

Programme of the presentations:

SAVIO TROPHY
This edition of the Historic Minardi Day will again be enriched by the Gara di Regolarità Classica “Il Trofeo del Savio” (Savio Trophy) that will be valid for the Italian “ACI Storico” National Trophy and the Criterium dell’Appennino of the Scuderia Nettuno.
The event will start from Imola’s Enzo and Dino Ferrari Circuit and will wind its way through the province of Ravenna and follow part of the course of the Savio Circuit that saw Enzo Ferrari win in 1923 as a driver. There will be no lack of beauty with the panorama of the Hills of the Romagna and picturesque townships. The race will finish inside the Imola Circuit for a party that will involve the participants of the Historic Minardi Day.

GAMING AREA AND SIMULATORS
Since this is the Historic Minardi Day, a weekend dedicated to passion and Motorsport and also to looking for enjoyment, you cannot miss the area dedicated to the simulators and E-Sport where you can test yourself by become a racing driver for the day. The new development will be the area dedicated to models and the challenge with radio controlled model cars divided into three categories (F1- F1 Classique –Mini) in collaboration with the Faenza Rc Team. In the paddock, alongside the cars there be extraordinary replicas of cars made with LEGO blocks, such as Ayrton Senna’s 1988 McLaren MP4-4.

TICKETS
You can buy the tickets at the entrance, Saturday 27 / Sunday 28 or for the whole weekend via TicketOne or directly from the circuit. The ticket will give you access to the paddock and pits of the Enzo and Dino Ferrari Circuit and the events present in the circuit, as well as to have laps aboard sports cars driven by professional drivers.