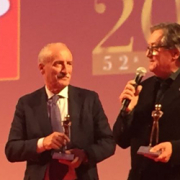 “I want to thank all the collectors, drivers, enthusiasts, sponsors and volunteers for the affection and warmth they showed me and for having transformed the Historic Minardi Day from a project into a reality by demonstrating that they are stronger than bad weather. One of our aims was to bring the families back to the circuit and to bring them closer to what I still consider the most beautiful of sports. The aim was achieved in full.

The Golden Helmet repays all the efforts made to bring these fantastic cars back to the track which otherwise would be difficult to see and to give all the fans the chance to admire them in action, as well as representing a vital stimulus in preparation for the next edition which is developing together with Formula Imola. This Golden Helmet is dedicated to all of you,” commented an enthusiastic Gian Carlo Minardi.

At two years from its birth the Historic Minardi Day, the event dedicated to drivers, fans, collectors and enthusiasts that want to experience once more the emotions tied to Formula 1 and the team from Faenza founded by Gian Carlo Minardi was awarded the Autosprint Golden Helmet as the Best Motor Sport Event of the year.

Autosprint’s Golden Helmets reached their 52nd edition and in more than a half century the magazine rewarded motor sport’s greatest champions. The 2017 edition also celebrated the biggest stars on four wheels, today’s and from the past.

The Historic Minardi Day had the great task giving back the world of Formula 1 and the competitions to all the enthusiasts by bringing them back to the heart of the circuit to admire the cars and protagonists that made motor sport history. Within the Imola circuit more than 70 racing cars from the world championship and many other GT cars, from lower formulas and classic cars such as Alfa Romeo came back to excite the feast of motors with their roar.

The 2017 edition was marked by the absolute debut, at 70 years of age, of Gian Carlo Minardi at the wheel of one of his “babies”, the Minardi M192 with a Lamborghini engine when he finished a full lap accompanied by warm cheers.

“On that occasion I think I set the new Imola track record for the slowest lap with a racing car,” remembered a smiling Gian Carlo Minardi, “I must once again thank my friend Frits for having made it possible, from the car to the helmet. It was a beautiful and emotional gift. At 70 years of age a dream came true for me which I had held back for too long. The organizational machine for the third edition of the Historic Minardi day is already at work and we expect to see you on May, 4, 5 and 6, 2018. Naturally at Imola’s Enzo and Dino Ferrari circuit with even more new developments,” concluded the manager from Faenza.

F1 | Gian Carlo Minardi “Verstappen has a destiny but he must grow as...

F1 | Sirotkin vs Kubica, Minardi “The end of a fairytale”
Scroll to top