Blog - Latest News
You are here: Home / Minardi Team / The Racing Team Nederland at the 24 hours of Le Mans with the colours of... 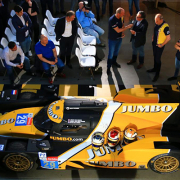 The colour scheme of the Lamborghini powered Minardi M192 that was the protagonist of F1 in 1992 with Alessandro Zanardi, Gianni Morbidelli and Christian Fittipaldi who took sixth place in the Japanese Grand Prix at Suzuka will come back onto the track next June 15th and 16th thanks to the passion and genius of Frits van Eerd and Racing Team Nederland.

The famous Dutch entrepreneur, collector and the greatest enthusiast of Minardi in the world, as well as the protagonist of the Historic Minardi Day in Imola wanted to pay homage to Gian Carlo Minardi by also choosing the iconic yellow, white and black for his Dallara P217-Gbson #29 that will take part in the 24 hours of Le Mans, the final round of the 18-19 Super Season fot the FIA WEC Endurance World Championship.

“There is a special friendship with Frits van Eerd and I am honoured that Team Minardi always inspired him. It is fantastic that the colours of my F1 cars were chosen for the Racing Team Nederland’s cars. Frits and I will continue will collaborate to reinforce this association with the Minardi name and I will be happy to advise him- as a sort of “godfather” for his passion for motorsport – in the field of racing teams, talents and possibly new projects,” commented Gian Carlo Minardi who was present at the presentation.

Together with Frits van Eerd, at the wheel of the Dallara P217 there will be a team made up entirely of Dutchmen with Giedo van der Garde and Nick De Vries (the F2 driver who is in McLaren’s youth programme).

Gp Spain | THE POINT by GIAN CARLO MINARDI “It was the grand prix of...

F1 | MINARDI “NIKI leaves us as a Champion, as a great test driver, manager...
Scroll to top