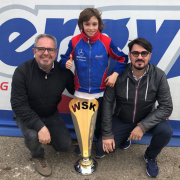 Andrea Kimi Antonelli’s win today at La Conca’s International Circuit in the latest round of the WSK Super Master Series was never in doubt despite a beginning marked by a problem with the kart.

The weekend of the young driver from Bologna tagged Mercedes – AMG began by gaining pole position in the Qualifying Heats as the result of two wins, a second and third in the Elimination Heats which then continued with strong wins in the Pre Final (Group A) and the Final which he finished with a leads of more than 5 tenths of a second over Stenshome.

For the driver followed by Minardi Management it was the third success in the season after winning the WSK Champions Cup and the Winter Cup.

“Despite a problem at the beginning of the weekend which was perfectly solved by the efforts of the team and the motor mechanic, Andrea scored another success by driving really well all the heats. We’re happy with the weekend here at La Conca because he carried on working with the team. Our minds are now on finishing the championship well with the double appointment at Samo,” commented managers Giovanni Minardi and Alberto Tonti.

After having been forced to cancel the second round on the track due to bad weather on the Samo track, the organizer of the championship announced that the stage will be run on the weekend of March 29th – April 1st on the Naples International Track.
Foto: KSP Reportages/Energy Corse

The Bandini Trophy and the Minardi Day together on the weekend of May 5th and...

Historic Minardi Day | The third edition is born between confirmations...
Scroll to top