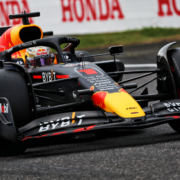 Max Verstappen is the World champion for the second time in his short career.

This is the first fixed point, with no ifs or buts. Regardless of the rain that hit the Suzuka circuit, regardless of whether the race lasted only 40 minutes, regardless of the penalty inflicted on Charles Leclerc by the sporting regulations and by the system of attribution of the points.

Both the Dutchman and Red Bull also dominated the Japanese Grand Prix taking out pole position and the win with almost a half a minute advantage on second place confirming the position at the top of this sport. A result that was also consolidated by the second place by Sergio Perez who, in the final laps, put Ferrari’s driver from Monte Carlo under pressure leading him to the mistake at the very end. With second place he equalled Leclerc’s points (249 points for both) and at this point of the season the situation for the Ferrari driver is not so rosy.

Even in the wet Ferrari confirmed its current limits. Competitive on the flying lap (in qualifying Leclerc missed pole position by only 10 thousandths of a second) while in the long run the differences with Red Bull come out, also linked to the degradation of the tyres that put Leclerc in crisis at Suzuka, but in any case he was the protagonist of an incredible defence stained only by the “long” stretch at the end that cost him second place.

Regulations in hand, I find the 5” penalty correct (this time coming after only a few minutes). Too bad that he had space to defend the position better but it is too easy to point the finger considering the difficult situation.

With the title definitively in Verstappen’s hands Leclerc has four grands prix (USA, Mexico, Brazil and Abu Dhabi) to try and save at least second place. It will not be easy staying ahead of Sergio Perez with this Red Bull.

Amongst the “others” congratulations to the two old men, Sebastian Vettel and Fernando Alonso. Thanks to their experience they knew how to handle a complicated situation finishing in sixth and seventh places. Well done also to Nicholas Latifi who, together with Vettel, was one of the first to pass from the intermediates so taking his Williams to ninth place ahead of Norris. It was an exciting tussle between Ocon and Hamilton for fourth place.

The real sore point of the weekend was the umpteenth case of confusion created by these absurd regulations. Despite having completed only 29 of the 53 laps (52% of the race) in the maximum time of three hours, full points were attributed. This is because the race was considered finished (the chequered flag was waved).

Honestly I find no big difference between finishing a race when the maximum time runs out or following a red flag.

After what happened in Spa-Francorchamps last year the Federation introduced new points systems that varied according to how many laps were raced. However, this points system is applied only if the race does not restart after a red flag…. To me this seems to be a useless complication, especially if it continues to be run on circuits hit by monsoons and/or cyclones. It may be appropriate to simplify these regulations and re-evaluate the calendars to avoid having three hour grands prix with cars committed on the track for much less time.