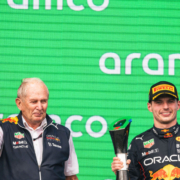 After the two drivers’ titles won by Max Verstappen in Suzuka Red Bull took out the constructors’ title thanks to the Dutchman’s win and Perez’s fourth place that in this way interrupted the domination by Mercedes that this year has had a drought of wins.

Austin showed all the supremacy of the team headed by Horner but especially that of Max Verstappen. For the first time since the start of the year the team made a mistake during the Dutchman’s stop making him lose something like eleven seconds that he quickly recovered on the track and taking the win ahead of Lewis Hamilton.

This win was the demonstration of the strength of the pair and also being able to count on a good margin of potential that has still not been expressed. Unlike the other grands prix, in Austin Verstappen had to take risks highlighting the big difference between him and Perez. This aspect should also open the eyes on the question of the budget gap that should contain all the costs without exception. It is one thing to have a team of good drivers of the calibre of the Mexican and many others. Another is to be able to count on the talent of Verstappen, Hamilton, Leclerc… drivers who affect both the results on the track and the expenditure. The same also applies to the engineers of the calibre of Adrian Newey. The budget cap makes sense if it contains 100% of the expenses of the team, with no exclusion. I will not enter into the merit of the figure.

Going back to the grand prix, it was interesting, certainly conditioned by the huge mistake made by George Russell at the first bend that led to the retirement of Carlos Sainz, the protagonist of an imperfect but faultless start. An episode sanctioned with a ridiculous 5 second penalty. Absilutely ridiculous like the penalty inflicted on Fernando Alonso. Thirty seconds for racing without a mirror. Apart from the fact this was not a blunt element that had not even broken off but if an F1 driver cannot drive without a mirror then he should change jobs. Two absurd penalties.

Well done Lewis Hamilton who brought out all his class, as did Leclerc who, starting from twelfth place took his Ferrari onto the podium showing once more a major problem of tyre wear. The battle for second place with Perez is still open and they will go to Mexico in less than a week with the same engine strategy.

Since announcing his retirement I seem to see a new Sebastian Vettel. He raced like a four times world champion and Sunday he was the protagonist of a wonderful race fighting until the final bend. It was the demonstration of how much different components can come into play in this sport. We see it also with Gasly, ready to say goodbye to Alpha Tauri and Ricciardo who went from the stars into the mud in a few seasons.

The American weekend brought Antonio Giovinazzi back onto the track. It was a mistake that could have cost him dearly in such a delicate moment in his career. Running against the barriers after a few laps is not a positive sign, even if I do not know the causes the led to him going off the track. On the other hand, Mick Schumacher did nothing exciting on the track.