Blog - Latest News
You are here: Home / Championships / Antonelli Dominates Le Mans (OKJ) in the fourth round of the European FIA... 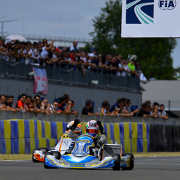 A new win this weekend for Andrea Kimi Antonelli, the young kart driver from Bologna in the team Rosberg Racing Academy, with Kart Republic material supplied directly by Mercedes and with the supervision of Giovanni Minardi of Minardi Management.

On the Le Mans circuit named after four times world champion Alain Prost that was conditioned by the rain and bad weather, Antonelli dominated the fourth round of the European FIA Karting Championship by winning the OKJ Final after starting from second place on the grid and crossing the finish line with a lead of 317 thousandths of a second over Spina.

Andrea Kimi Antonelli confirmed that he is a protagonist on the international karting scene with his first win in the European OKJ and setting the best lap in Qualifying-Practice with a time of 52.930 (fourth best time in absolute 47 thousandths of a second from pole position).

Placed in Group D Antonelli finished on the podium in all the HEATS with a win, three second places and a third place that gave him second place overall behind Stenshome from Norway in a field made up of 79 drivers.(34 qualified for the Final).

With his win in the Final Andrea Kimi Antonelli ended his first European championship in OKJ in second place and with the title of vice champion with a total of 63 points and the best placed of the Italian drivers.

“I’m very happy with this win. I waited for it and it finally came. It was an excellent weekend in which I enjoyed myself. The Final was not easy. In the first laps Stenshome defended very well and after I managed to overtake him I dictated the rhythm despite a very slippery track. Second place in the championship is a very important result even if there is still the regret for the points lost in the beginning. We are now thinking about the world championship in Finland,” commented a satisfied Andrea Kimi Antonelli.

“I am very happy that the first win in the CIK FIA European Championship finally came. This was a deserved win, even if it does not wipe out the regret of a difficult start. This title was also easily within his reach. We will now start working for the next objective, the world championship in Finland,” commented manager Giovanni Minardi.

After the summer break Andrea Kimi Antonelli will fly to Finland and the Alahärmä track for the FIA Karting World Championship scheduled for September 6-8.