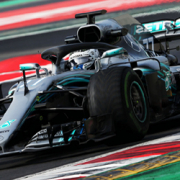 If we can judge a good day by the morning Mercedes can sleep peacefully. In the course of these first four days, which were then reduced to three because of the snowfall on Wednesday, Bottas and Hamilton drove constantly with the Pirelli Medium Mixes (unlike Vettel and Raikonnen who worked with the Soft) and they finished their work with the best time set by the World Champion who clocked an important 1.19.333, despite a heavy load of fuel.

The first session was assuredly conditioned by the bad weather and the very low temperatures in which we saw the gap between the first and the last come down and with good reliability by all. Under this point of view Toro Rosso was surely the team that was most watched and it came out of the tests with full marks. Only in today’s session they managed to complete 147 laps.

The pair of Alonso-Vandoome also managed a lot of laps, even if the best time of 1.19.854 was made with the HyperSoft mix. There was one worrying sign when, despite the cold, McLaren had to open some of the slits of the chassis to let the Renault engine breath.

Ferrari also covered a lot of laps and it ended the programme with 120 laps on the plus side for Sebastian Vettel to which must be added Tuesday’s 98 laps (best time of 1.19.673 with the Soft) and the other 80 covered by Kimi Raikonnen on the first day.

After Red Bull’s positive start (Ricciardo set the best time on the first day and covered 105 laps) they lost the way and closed the session with only 35 laps completed by Max Verstappen who was the author of a track exit which interrupted the session.

We got our first taste, but it is still too early to judge. During the days of the break the teams will be able to analyse the data they collected before going back on track for the second session which will give us some better hints for Melbourne (with the hope for hotter weather). It will be interesting to follow Robert Kubica’s work for Williams. The Pole constantly showed better times than the two official drivers, while Leclerc and Sauber started with the right foot.

Tests Barcelona, tomorrow the spotlight will be on the 2018 season

F1 | Gian Carlo Minardi “Mercedes has no rivals. At Barcelona it can...
Scroll to top