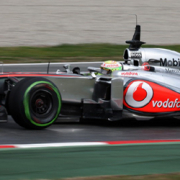 The first race of the upcoming season will start in a short time at the Albert Park. In few hours we will see the green light switched on at the Australian circuit, where the first of 19 GP will take place. In the past season, the McLaren duo, along with the Red Bull team started the racing season by getting a podium finish; Jenson Button won the race, Vettel finished 2nd and Hamilton 3rd.  The 2009 world champion was the first of 7 winners who would have won different GP throughout the season.

Even this year the English driver is considered to be successful at the wheel of the MP4-28. That is due to his way of driving, which is so respectful towards the Pirelli tyres, as declared by Gian Carlo Minardi to the website www.minardi.it. The manager from Faenza contested 21 world championships with his Minardi Team: “Jenson Button is the favourite driver among top teams, because in 2012 he showcased his ability in managing and using Pirelli tyres, especially medium and super soft, which will be used in Australia. I’m expecting drivers to pit at least 3 times. An exciting struggle will be undertaken by Ferrari and Red Bull to get onto the podium. The Australian GP will be full of uncertainty and in qualifying both Lotus and Mercedes could bring attention to them. After the first four races, we’ll have a more precise overview of the situation.”

The Australian GP meant happiness and regret to the Minardi Team, for the results obtained and for the ones missed: “For us, it was always an interesting GP, even because it was the last race before the beginning of the racing season. I have good memories, but sometimes bad luck was at our side like in 1989, when Martini qualified 3rd behind Mansell and Senna, after having had a wonderful warm up performance. Unfortunately our work was ruined by heavy rain, so we finished 6th, scoring one point. Before the Australian race we got important results, such as the 5th and 6th place in England, the 5th place at Estoril and set the best time at Jerez.

It’s a pity that only the first six drivers could score points. Maybe, things would have changed with a system like the one we have today…..For example, in 1985 – the year that marked the debut of the Minardi Team into F1 – we ended the season by finishing 8th at Adelaide, with the driver Martini. Nowadays it would have been a great result. Thinking about more recent events, in 2002 a budding Mark Webber finished 5th in the first race”, said also the manager.