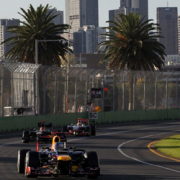 Here we are. Winter is over, as well as the new F1 cars launch days and the 12-day-pre-seasonal testing. The teams checked the new changes to be brought on track for the upcoming racing season (or for the first races, at least), which is about to start at the Alberta Park in Melbourne.

While teams made all their evaluations and have all parts well checked, supporters and racing enthusiasts still have many unanswered questions: “How much gasoline was there in their tanks? What kind of tyres did they use? Did they push as hard as they could? And obviously……how is the new Ferrari F138?”

These are all good questions which are almost impossible to answer, as we think that teams played seek and hide with each other and tested all their upgrades separately. Sometimes they also raced on unbranded tyres and worked a lot on reliability.

–          The new Pirelli tyres had a sudden and heavy degradation, so it will be very important to find the right moment for tyres change;

–          Compared with 2012, regulations haven’t changed so much and a technical programme has come to an end. That led teams to make their performance lever higher.

–          Talking about the Scuderia from Maranello, we have to say that the Ferrari team found a good match between the wind tunnel data and on-track data. This didn’t happen in the past racing season.

PIRELLI: as it already happened in the past season, the Pirelli tyres are the darkest horse of the upcoming racing season. During tests, tyres showed to have a sudden and heavy degradation, so drivers will probably have to pit many times each race. (according to the data collected in Barcelona, 4 or 5 pit-stops would be scheduled). Honestly, I’m wondering if it’s correct that all wind tunnel and on-track tests undertaken by teams in winter, were influenced by tyres degradation or performance.

FERRARI: they’re recovering from the past season shock. In fact, last year, timesheet data and car on-track behaviour were completely different if compared to simulator and wind tunnel test data. No doubt they progressed so much, but only in the first races we will see how much they progressed over rivals.

MERCEDES: they showed having their work optimised on a single qualifying lap and on super-soft tyres. Now, they have to demonstrate if they overcame the on-track and long run issues they had in the past season.

MCLAREN: it’s a balanced car. It is driven by a young driver like Perez and an experienced one like Button, who demonstrated to manage tyres so well in the past. This aspect could make the difference in the first GP and could be a winning surprise.

RED BULL: they’re the reigning champion; it’s impossible to decode feedbacks. This is the most scaring item. Their real potential is not the one displayed in Spain, and it’s also difficult to evaluate how tyres influenced car performance. Both drivers complained about tyres degradation, but this will be a common issue. They showed off self-confidence and set good times on hard tyres.

LOTUS: the new E21 is a top team car, for sure.  Raikkonen’ positive comments on the car mean that the Finnish driver appreciates his car potential so much. He will be one of the outsiders to struggle for the 2013 world title.

Besides the 5 top teams, a good struggle could be also undertaken by Sauber (which has the best car from a technical point of view), Williams, Force India and Toro Rosso to get that 6th place which is like the 1st for secondary teams. The Swiss team has to make a step forward thanks to Nico Hulkenberg’s contribution, even if Gutierrez is a “dark horse”. Finally, we have Marussia and Caterham; the Russian team has a slight advantage over the Anglo-Malaysian team.

After analyzing teams I would like also to analyse the couples of drivers who will give the best contribution to their teams, in terms of scoring.

HAMILTON/ROSBERG: they’re the best couple among the 5 top teams.  This is due to their long experience and the feeling between them. Nico and Lewis raced in the same lower formulas. Rosberg can cause problems for the 2008 world champion. They can be a good duo for the constructors’ championship.

ALONSO/MASSA: Fernando’s performances are like the ones displayed last year, so he will act in the same way even in the forthcoming season. Massa’s performances are getting better and better, as he showed in the final part of 2012 championship and in the pre-seasonal tests; they will aim for scoring important points.

VETTEL/WEBBER: this is the duo to be defeated. Thanks to them, Red Bull won three constructors’ championships. They demonstrated to be the two most prolific drivers of the world championship.

RAIKKONEN/GROSJEAN: they represent the biggest wild card. If the Finnish drivers demonstrated to be able to strive for the world title, Grosjean was able to deliver good but also tragic performances. He had good performances during winter testing, so the Frenchman’s progression can be decisive to score points for the constructors’ championship.

BUTTON/PEREZ: despite the Englishman great experience, even regarding tyres management, as demonstrated by winning three GP in the past season, the McLaren duo’ general performances may not be so good; the Mexican driver’s limited experience may not be enough to confirm their position in the championship.

MALDONADO/BOTTAS: among second-category teams, the Williams drivers will be the ones who will be able to score the most. They’re young and determined and, if Maldonado is able to make some steps forward, the team will probably be the protagonist of some race.

VERGNE/RICCIARDO: they have to confirm their potential. They can both rely on one more year experience. Running for an economically speaking sixth place team, they’ll have to make a double effort to express their potential. The car was built in such a good way and, to enable one of them to get Webber’s position, they’ll have to act like top drivers.

BIANCHI/CHILTON: I think Bianchi made a good choice running for Marussia. Although he doesn’t run for a highly competitive team, he will have the opportunity to progress, thanks to a good competition with his teammate. The first year in F1 is never easy. If he had signed a contract with Force India, he would have been much more under pressure, as he would have asked to get high results, besides the fact of being competitive towards an experienced driver like Di Resta.

Gian Carlo Minardi “The truth will be discovered only in Melbourne”

Bet on Melbourne – a winning Button
Scroll to top