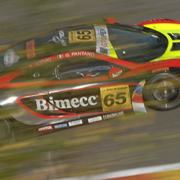 The International GT Open Championship’s final stage is getting closer and closer. The Championship’s seventh and penultimate round will take place this week end on the long straights of the very fast and legendary Monza track.  Bhai Tech Racing’s mission at Monza will be to try to take revenge.

After the Spa-Francorchamps difficult racing week end, the Italian staff, directed by the engineer Roberto Costa, won the first challenge by completing the rebuild of the car which was damaged in Belgium and worked hard on the two McLaren MP4-12’s development. In preparation for the next round, the Veneto-based team moved to Adria and Monza with its driver Rafael Suzuki, for a two-day-shakedown-session on the car #66: “It was an intense and useful two-day-shakedown-session, as we carried out several checks on Van Der Drift and Razia’s car. Now we’re ready for the Monza week end”, says the technical director Costa.

Bhai Tech and his four drivers Giorgio Pantano, Rafael Suzuki, Van Der Drift and Luiz Razia are all ready to regain the ground they lost in Belgium. The Belgian race didn’t display the Italian team’s real merit, so the squad is now ready to fight to regain the standing’s peak in the GTS class “Because of some unlucky coincidences we didn’t manage to drive a successful race at Spa, but we want to be protagonists in the Championship again. We worked hard at the driving simulator in the past weeks. Weather will play a key role as rain is expected on Saturday, so it won’t be an ideal situation for us.”

The layout of the Lombardy-based track represents a further challenge for the Bhai Tech Advanced Vehicle Science Centre’s racing team “Unlike the naturally aspirated engine, the turbo engine usually has some troubles in the chicane, so we will probably have some problems after the first chicane and the Roggia, however I’m sure that our drivers will be able to overcome this problem. Next race will be hard-fought and we’ll try to do our best to get as many points as possible.”

It was on the Italian track that Bhai Tech’s driver Van Der Drift took his first pole in the Italian GT Championship “The two Championships are very different from each other, especially for what concerning tyres, but it will be a good starting point”, ends Roberto Costa.

The Monza week end will start on Friday with two 60’ free practice sessions in preparation for the two qualifying sessions to set the starting grid order of the two races. Race-1 will start on Saturday at 04.15 p.m. (70 min.) and the final race will take place on Sunday at 12.15 p.