Blog - Latest News
You are here: Home / Championships / BHAI TECH READY TO LAY ITS POKER ON THE TABLE AT SILVERSTONE 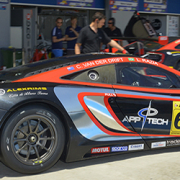 One month after the Spanish round at Jerez de La Frontera, Bhai Tech Racing’s four drivers Pantano/Suzuki and Van Der Drift/Razia gets ready to race again at the wheel of the McLaren MP4 – 12C.

The historic and charming circuit of Silverstone will be the place where the International GT Open Championship’s fifth round will take place. F.1 GP is raced at the English circuit since the ‘50s. On the 5891 m long track located in the Northamptonshire , the Mestrino-based squad directed by Mr. Roberto Costa the engineer, will try to “lay its poker on the table” to continue to get good result and deliver the same stunning performances performed throughout the first half of the Championship. The Italian team will race at Silverstone as the GTS class leader, after taking a double win at the Nurburgring.

The track’s “trade-mark” is represented by the three famous corners named Maggots, Becketts and Chapel, which all lead to the long straight called Hangar Straight “Silverstone is a very fast track, so it doesn’t suit our McLarens so well. In this month we’ve continued to do a complete development work, without focusing on a particular area of the car. We’ve worked side by side with McLaren to help the team to develop, basing our work on all data reported from other Championships”, says Mr. Costa, the engineer.

A great job was done not only at the factory, but also at the cutting edge driving simulator suite which is inside the Advanced Vehicle Science Centre “Our drivers have made several simulator sessions to become more familiar with the English track and get prepared to deal with any situation. We’re talking about a track where a driver can really make the difference. It will be so important to avoid mistakes and make the most of our potential”, comments the technical director.

It will be a domestic race for the Italian team, which is partnered with the McLaren “this is one more cause to do a great job”. When we talk about Silverstone, weather conditions play a very important role “The temperature is very pleasant at Silverstone in these days, it’s about 23-24° C. It would be better for us to race in the dry, but we’ll have to wait for the race week end to come to have more detailed information about that”, ends Mr. Costa.

The race week end will start on Friday with two 60’ free practice sessions in preparation for the two qualifying sessions to define the two races’ starting order (on Saturday at 9.45 am and at 11.40 am). The 70’ race 1 will start at 4.00 pm on Saturday. The 50’ final race will start on Sunday at 12.oo o’clock.