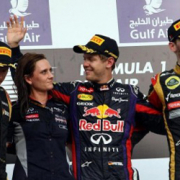 Even the ninth round has finished. Let’s take some votes on the German GP’s main protagonists.

PIRELLI 7 – After last week’s great issue, the supplier was able to find a solution to a ridiculous technical situation. They hadn’t any problem this time. However I’m still skeptic about the changeableness of tyre behavior; I can understand the difference between different types of compound, but I cannot understand the reason why tyres behavior changes so much whenever the temperature of the asphalt changes a little bit. I don’t think it’s the right way to make a GP more spectacular.

Sebastian Vettel 9 – There isn’t much more to say. He can always make the most of an excellent car and he was able to recover from Silverstone’s whitewash. Webber was very clever, as well. The Australian was able to respond to the problem he had during pit-stop in a very good way. He recovered several positions and scored points, showing he can make it onto the podium.

Raikkonen 8.5 – Excellent GP both for him and for the Lotus.

Romain Grosjean 8 – He was a good aggressor and team man. He gave way to his team mate.

Fernando Alonso 7.5 – This mark is only for Alonso, not for the Ferrari team which is in trouble at the moment.

Jenson Button 7 – He showed he is able to give the best of himself, making the most of his McLaren which is not yet at the top. The team can be a dangerous outsider also in Hungary, where temperatures will be so high.

Sergio Perez – Nico Rosberg – Nico Hulkenberg – Daniel Ricciardo 6 – The racers who deserve this mark the most are the Toro Rosso’s driver Ricciardo, who drove a very good qualifying race and the Sauber’s German driver who scored one point.