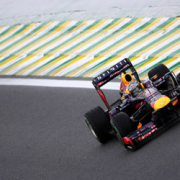 The end of the 2013 F.1 season is marked by FIA’s poor figure. I think the decision taken by FIA with regards to Felipe Massa is simply stupid and I also think that it’s time even for the Federation to take some measures to rejuvenate its board. An exciting and hard-fought GP, during which exciting passes were made, was ruined by some decisions taken by external people who change their way of judging each time, so they don’t ensure a homogeneous judge. Furthermore, I think that Hamilton was imposed a penalty to try to rebalance the forces deployed. It was a bad double mistake.

Congratulations to Sebastian Vettel and Red Bull who won everything. Seb set a new record, as he took 9 consecutive wins and 13 wins overall. He took as many wins as Michael Schumacher, even if the German driver reached this goal in a 16-event-Championship, not in a 19-event-Championship. Mercedes finished second in the constructors’ championship, ahead of Ferrari. It was a great result for the German team; this result make Alonso’s second place in the drivers’ championship even more important, if we consider the technical disparities between the two teams. The Spaniard confirmed to be the best driver ever. If Felipe hadn’t been imposed a penalty, the second place would have been within the Scuderia’s reach, however the Brazilian driver’s missed points throughout the season, weighted on the final result. Now it’s time to analyze problems and find a solution quickly, as time is really short, especially if we consider all the changes that will be introduced next year.

The end of the 2013 season marks also the end of the 8-cylinder-aspired engine and many drivers are about to move to other teams or to change their lives, just like Felipe Massa and Mark Webber. The Australian driver ended the season with the second place and the third overall, after making his debut in the F.1 Championship in 2002 alongside the Minardi Team. He scored two points on his debut race. Few drivers can boast this record. Mark leaves the World Championship as a protagonist. It’s really a pleasure for me to see that three drivers who started their F.1 career in Faenza, finished in the top 3, two of them, Fernando and Mark, made their debut in the Championship alongside the Minardi Team.

Mind is set on the 2014 season, during which some changes will be made with regards to regulations. Those changes could make some teams come up again and bring some new things relating to engine, we still don’t know about. The Renault engine failure with regards to Lotus has to make us think: if a team ends its season with an engine failure, having eight tested engines per driver at its disposal, I can’t imagine what will happen next season, when each team will have only five brand-new engine units per driver at its disposal.  I think that too rash steps were taken. Furthermore, if we consider that these changes will increase costs, we can say that the picture is complete. This is one of the reasons why some second-tier teams haven’t completed their line-up yet. Most of them are looking for the best technical and economic solution. It is true that FIA has to “live” side by side with car companies and the future of car racing will consist in the turbo engine, the kers and the hybrid, but we have also to consider that many teams are now undergoing a critical economic situation.

Mark Webber, a gentleman, an excellent driver and sportsman