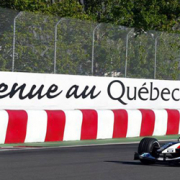 After a short staying in Europe, F.1 is no ready to leave our continent to move to Canada. The European part of the Championship has been featured by arguments about Pirelli-Mercedes tyres test at Monte Carlo and some extra sport gossip. Contrary to what was stated in the last few weeks, Pirelli is going to bring to Montreal the same tyres used until now. Teams will have the chance to test Pirelli’s new tyres only during free practice 1. The new tyres will make their debut at Silverstone.

In Canada, teams and drivers will use Medium and Super-Soft tyres.  There’s a big difference between the two compounds in terms of degradation, so tyre management will be a key to success and the driver who will manage Super-Soft tyres at best will make the most of it. It will be a very interesting weekend even if it won’t be easy at all, as the Canadian track is a mix between a street circuit and a permanent one and it’s also full of pitfalls. There’s a long straight where drivers can make use of the DRS (even if for a shorter stretch). The straight leads to the last famous chicane, characterised by the “wall of Champions”. Brakes will play a key role, as cars will have a higher fuel load because they will burn more petrol than in any other circuit of the world. North wind can change conditions so quickly.

We’re entering the “hot stage” of the season; Red Bull is the leader, even if it hasn’t demonstrated to be unbeatable, Mercedes will have to demonstrate to be able to maintain the same strong performance displayed in Monaco. In that case the German team will become a troublesome rival. Ferrari demonstrated to feel comfortable on Medium tyres, but the Italian team still doesn’t feel comfortable on Super-Soft. The team will have to recover and shorten the gap with Vettel.

Obviously we don’t have to forget about Lotus. The team is taking strong performances since the beginning; the car demonstrated to feel comfortable on all tyres and maximized its performances on a single lap. Given the difficult financial situation, it twill be difficult for them to keep the pace of top teams, carrying out 2013 development work and beginning to develop 2014 new turbo project at the same time.

Thinking about my past experience in F.1, I have some regrets relative to the Canadian gp. We never managed to finish in the zone points (top 6), but we finished in the top 10 ten times out of 20, thanks to Martini, Fisichella, Badoer, Fittipaldi, Marques, Verstappen and Baumgartner’ strong performances in 2004. In such a demanding GP, finishing in the top 10 was certainly an excellent result for a second-tier team. Unfortunately at that time only the first six drivers finished in the zone points.

Minardi “Yes to F.1 tests but with a rookie driver alongside the regular ...
Scroll to top