Blog - Latest News
You are here: Home / F1 / Chinese GP– Everyone in a chase for Red Bull 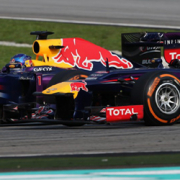 The countdown for the Chinese GP, where the third race of the F1 world Championship will be run, has already started.  Almost three weeks after the Malaysian GP, teams and drivers worked hard in the factory to get well prepared for the Chinese challenge and try to get the better of Red Bull whose drivers finished the Malaysian GP on the podium, along with Lewis Hamilton who made it onto the podium for the time.

While Helmut Marko says that “we won’t give team commands any more”, the Scuderia will have to try to forget about the Malaysian weekend, where it only managed to finish fifth thanks to Felipe Massa, after Alonso’s premature withdrawal.

“In the first two races we kept up a good pace on both kind of rubbers – explains Ferrari’s Technical Director Mr. Pat Fry to www.ferrari.com website – but our qualifying performance it’s still not so good, so it’s to this direction that we’ve focused our work. Until now, we’ve focused on long-run so much, even though this year they’re not as long as they were before because of the increasing number of pit-stop during each race. The qualifying performance has not been put to the side, but we know that we can still make improvements to that direction. There are still many aspects we have to understand about the new car and we’ll try to make the most of it.”

When he’s asked to evaluate the opportunity the new F138 has to be successful in the next GP, Mr. Fry’s reply is cautious: “The circuit of Shanghai is a mix of different corner types and a 1.2 km straight. Will the track get on well with our car? It’s too early to say it, as there are too many unknowns to make an objective evaluation. For example, this is the first weekend we’ll use the Pirelli soft compound, along with the medium. I think we’ll have a clearer picture only at the end of the race, as we’ll have more details about how all the tyres compare to one another. So to some degree, Shanghai will be another learning weekend for all teams , as everyone will get new feedbacks for the first time, but I’m not concerned, giving the fact our pace, relative to the other teams, was ok on all the tyre types we tried so far.”

“Even if we’ve done only two races so far – says Felipe – it was clear that the car was more competitive than last year. This means that the work we did on the F138 during over the winter has taken us to the right direction. The car has much more potential. I always want to be fighting for the win and, even though in the first two races it didn’t work out, our race pace was excellent. All I can say is that there are definitely more than two teams that are capable of fighting for the wins and the championship and our team is one of them. I’m so pleased to see that the car is moving forward in the right way and it’s delivering results on track that we expected when looking at data in the wind tunnel and in the stint at the simulator. We’re all well prepared for the next GP – reckon Felipe – all the updates we planned to bring to Shanghai after working on the simulator last week will be made available. I hope this translates into a further performance improvement on track. Shanghai is a very nice track with a variety of corner types and fast straights, so you definitely need a car that works well in the fast sections, but you also need it to have plenty of downforce to deal with the tighter turns. We can expect to see quite high tyre degradation, especially on the fronts, so strategies will deeply affect the final outcome. Massa’s high expectations regarding the third race are the following: “The aim is not only to fight for a lot more points, but also for a podium and hopefully to get on the higher step of the podium. The season has started in the right direction and it’s so important to set oneself higher targets.”

Great attention will be paid to the car manufacturing company from Stoccarda which just one year ago scored its first win with Nico Rosberg, after 57 years: “I have good memories her in China. I like this track so much and I have positive feelings going there with the car that we have at the moment. The team has been working so hard to develop our car. We’ve had a strong start to the season and I’m confident we will keep pushing hard. I hope to score good results in China and Bahrein.”, says Nico. It’s the same for his teammate Hamilton: “The first two races have been so interesting, we’ve got more than we had expected. We should keep pushing hard and work hard on car development. We have several upgrades to bring to China.”

Jenson Button’s start of the season was not so easy. The British driver hopes that the Chinese GP feels like something of a reboot of the start for him: “The Chinese Grand Prix almost feels like something of a reboot of the start of my season. Taking home two points from the first two races obviously wasn’t what we had in mind at the beginning of the year, but I think everybody in the team has picked themselves up and really attacked the task of addressing our car’s issues. We know where we’re losing performance, so I think we’re actually all looking forward to seeing just what we can achieve in Shanghai. As far as the circuit goes, I’ve always enjoyed racing here: our car has always performed well around this circuit and we’ve always seemed to be able to find a good balance between the slow stuff, the high-speed changes of direction and the drag-loss needed for the long straight. It’s a pretty good place for racing, too, because that straight offers such a good opportunity for slipstreaming and overtaking. I think we can have a pretty good race. The important thing for us is to hone our strengths and increase our understanding of the car.”

“In Australia and Malaysia – says Jonathan Neal, the managing director – we’ve made upgrades and we’ve shown to be capable to keep the pace of the first teams; we made more upgrades to be brought to China, some of them had already been planned, some of them were made to try to solve the problems found. Free practices will be so important, as through them we’ll have the opportunity to check the package’s feature. Anyway I think we’re going in the right direction, even though we’ll have a clearer picture only after the race. Although we had some problem at the beginning, I think we’ll be able to fight for the title, ok, there is still a lot to do, but I think we have to trust in our potential.”

The Australian and Malaysian races were two different races for Lotus and Kimi Raikkonen, aiming for getting high positions: “Foreseeing what is going to happen in the next GP it’s always difficult. The car has different behaviours on different tracks. The E21 will have new elements to be brought on the Chinese track; it will be interesting to see what it’s going to happen in the dry. In Australia everything worked perfectly, while in Malaysia everything was much more complicated, even because of a car collision at the beginning of the race.”

Backstage – Alps, WSR 3.5 and NEC kick off
Scroll to top