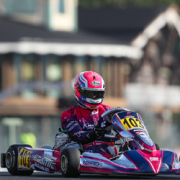 It was definitely a weekend to forget for Karol Basz who was involved on Finland’s Alaharma track in the fourth and penultimate round of the CIK FIA European Kart Championship, The weekend was strongly conditioned by contacts that nullified the final result, irreparably compromising his position in the ladder.

The Kosmic Racing Team’s Polish driver had put himself on show from the very beginning of the qualifying heats, just missing out on success in the first round with a second place and fourth place in the third round which was the result of an imposing come back after a lightning start from sixteenth place following a time penalty due to the damaged nosecone in the previous round.

However, his excellent pace was completely nullified at the first curve of the final session when Karol was forced to start from the back of the grid after a contact. In any case, he set the second fastest time for the race but had to be satisfied with 22nd place.

With an excellent start from twentieth position after having scored in the warm-up, Minardi Management’s Krakow born flag bearer managed to reach up to fifteenth place before being hit with another time penalty for the fall of the nosecone and thus closing the weekend outside the points.

“It was surely not our weekend. Qualifying did not go as I would have wanted and so I was forced to start the Final well back in the grid. Making up on this track is really difficult despite our good race rhythm and after having made the fastest lap in the final. I will try to make up for it quickly in Sweden next week,” commented Karol Basz.

“There must be more control by the race director during the races because ever more often the work of an entire weekend is thrown away by too much impetuousness of many younger drivers which is then left unpunished. This behaviour is carried on even when they reach Formula 4 where these same drivers cause dangerous accidents.

“We came to Finland with the objective of making up important points to fight for the title in Sweden. Instead, we are forced to leave the track without points despite that fact that Karol was amongst the fastest drivers. A real pity,” was the analysis of managers Giovanni Minardi and Alberto Tonti.

The closing chapter of this European championship will take place next week in Kristiansad (Sweden) where Karol will try to reach the podium at the last gasp and which today is fifteen points away.

GT Italy | A podium double for Karol Basz at Mugello

F1 | Haas conferms its drivers. Minardi “A defeat for the Ferrari sy...
Scroll to top