Blog - Latest News
You are here: Home / Championships / CIK FIA | Karol Basz just missed out on the podium in the first European... 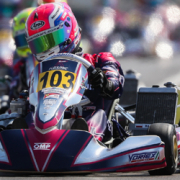 After the en-plein garnered in the last appointment of the WSK Super Master Series (6 wins in one weekend) Karol Basz returned to the Sarno track for the first round of the European CIK-FIA.

Kosmic Racing’s Polish driver established himself as a great protagonist for the whole weekend solidly winning top positions in the “OK” from the first rounds, closing qualifying with third place overall and reinforced by the four podium finishes in the five rounds raced. As part of group A Karol put together a win, two second places and a third place.

He only missed out on the podium in the final, finishing in fourth place after fines come back and two external overtaking manoeuvres,

“It was a really difficult weekend. Our rhythm was very good but in the Final I Iost time in the first two laps sliding down to sixth place. We’re only in the first round and the championship is still long. We must concentrate on the next appointment,” commented Karol Basz

“In the Final he did very well to make up the lost positions with two excellent external overtaking manoeuvres. The podium was within reach but overall the weekend was very positive. Karol fought all the way for the podium and we will fight for the championship until the end. Now we will concentrate on Imola,” commented managers Giovanni Minardi and Alberto Tonti.

Next weekend Karol Basz will make his debut in the Italian GT Championship at the wheel of the Team Antonelli Lamborghini Huracan Super GT Cup at Imola’s Enzo and Dino Ferrari Circuit. The two races will consist of 48’ + 1 lap scheduled for 12.40pm on Saturday April 29th and 3.55pm on Sunday April 30th and will be streamed live on the website of ACI Sport (http://www.acisport.it/it/acisport-service/live-streaming)

Karol Basz doubles up. He starts the Italian GT Championship with Antonelli...

Karol Basz is ready for his debut in the Italian GT Championship with Antonelli...
Scroll to top